Tidings from afar in the trembling rocks

Recording earthquakes is one of the main jobs of the folks at the Berkeley Seismological Laboratory (BSL), the host of this blog. But measuring those tiny wiggles of the ground caused by temblors near and far is by no means trivial. Compared to reading an electrical current off an ampere meter or the temperature from a thermometer, running a network of seismometers is a rather complex undertaking. BSL operates a network of earthquake stations all over Northern California, from Fresno County in the south to the Oregon border (see map). 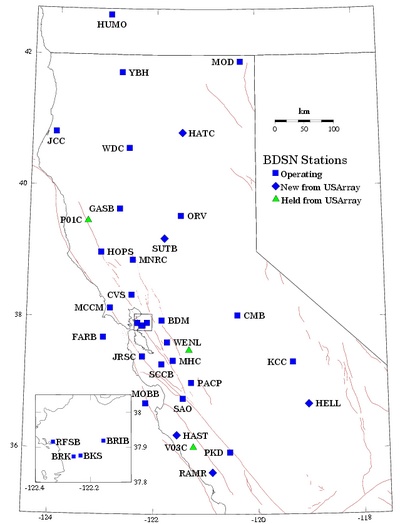 Map illustrating the distribution of BDSN stations in Northern and Central California.

Undoubtedly the most important items in this network are the seismometers. Most of these sensors are handmade masterpieces of mechanical engineering. Their function is to pick up even the slightest movement of the ground. Modern feedback sensors are easily capable of registering a millionth of an inch or less. Even the tiny footsteps of a mouse on the concrete floor inside a station can be noticed. These seismometers convert the ground vibrations into electrical voltages. They in turn are transformed into computer readable bits by a digitizer, the second most important item in a seismic station. The bits are then electronically packaged into groups, which in turn are transmitted to BSL's data center on UCB's campus. Sometimes, the data packets follow circuitous paths before they reach Berkeley. Some travel by satellite; others by phone lines, by radio or simply over the internet.

Once they reach the BSL, the data are checked, analyzed and stored forever on specially secured computer disks. BSL's archive of earthquake recordings is one of the most complete collections in the world, dating back almost 100 years. All of these data are accesible to all researchers free of charge.

And what do scientists do with Berkeley's data? There is indeed a wealth of information stored in those seismograms. Some seismologists use them to study the actual physical processes during an earthquake. Others compute how strongly the ground shook in response to the seismic waves, thereby laying the ground work for the planning by civil engineers. But one of the most important aspects of seismology is the unravelling of the Earth's interior. One of the first professors of seismology in the world, Göttingen's Emil Wiechert, once described this scientific endeavor in very poetic terms: "The trembling rocks bear tidings from afar. Learn to read their meaning."

This sentence, in its original German, is cut into the stone above the entrance to the earthquake station at Göttingen University (see picture). In one of the next blogs, we will see what scientists do to read the meaning from the "trembling rocks." (hra026)