A Look Beneath the Old Continent

A few weeks ago, the blogger promised to describe how seismic waves can be used to "X-ray" the Earth's interior (see blog January 14, 2009). Well, here is a very recent example from Europe, but let's start with some basic physics. Have you ever observed what happens to a pencil when you stick it into a glass of water? It looks bent (see picture). The pencil doesn't really bend, of course - just pull it out of the water for proof. It looks bent, however, because the velocity of light in water is considerably lower than in air. As a consequence, light rays bend when they hit the boundary layer between the air and the water, hence the crooked writing utensil. Physicists call this phenomenon "refraction". 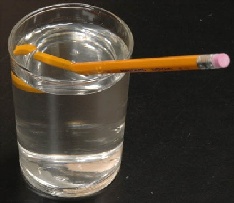 Seismic waves are also refracted when they hit a boundary layer inside the earth. Like the pencil, they bend at the transition. The boundary between the Earth's crust and the mantle below it is just such a transition. There is a big change in the seismic velocity, or the speed at which seismic waves can travel through the two layers. This "discontinuity" is actually one of the strongest refractors in the hidden world beneath our feet. Seismologist have found a way to compute the depth of this boundary layer by measuring certain onsets in a seismogram.

Recently a group of 60 researchers from all over Europe compiled thousands of such computations and merged them into a map of the European underground. The colors of this map show the depths at which the crust ends and the Earth's mantle begins. The crust is thickest under Scandinavia (dark blue area in the map), where it extends to a depth of almost 40 miles (60 km). This is a consequence of the last ice age, when for more than 100,000 years this area was buried under a pile of ice one mile high. The weight of the ice pressed the crust deeper and deeper into the mantle. The large blue zone covering the right half of the map represents crust that is 25 miles thick. There, beneath Russia and the Caucasus, is a "shield" of rocks that are one-billion years old. 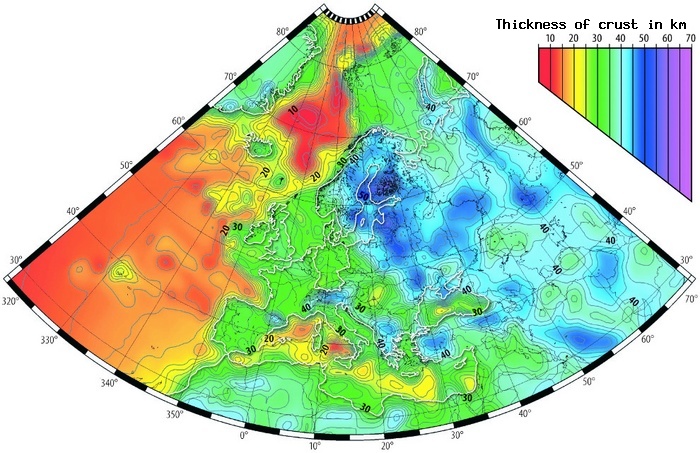 The section on the left, in red and yellow, shows that the mantle begins a little bit more than 10 miles deep. These are typical values for young oceanic crust under the eastern North Atlantic. Under the green area in Central Europe, the mantle starts at about 15 miles depth, a common value which we also find in many areas under the United States. The mountain ranges of the Alps and the Pyrenees can also be seen as small blue splotches on the map. Under the Mediterranean, the crust is thinner again. This sea was once a large ocean, which got squeezed into its modern elongated shape by the plate tectonic collision of Africa and Europe. The reddish area under the Arctic Sea and near the North Pole shows how powerful the tool of seismic imaging is. Without the analysis of seismic waves, we would not know that the Earth's crust under this nearly inaccesible area is just over five miles thick. (hra030)