Tsunami in Samoa - Earthquake in Sumatra 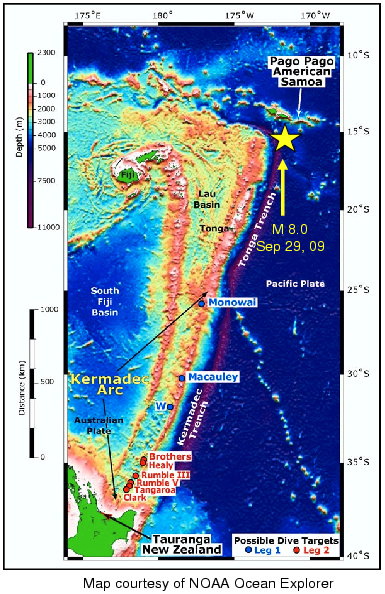 The strongest earthquake so far this year created a deadly tsunami in the South Pacific. At least 100 people were reported killed by the waves in the Samoa islands and in Tonga. The quake, which was located 11 miles below the seafloor in the triangle between Fiji, Samoa and Tonga, had a magnitude of 8.0 according the United States Geological Survey. The Pacific Tsunami Warning Center in Hawaii calculated its magnitude to be even higher, at 8.3, and initially issued a tsunami advisory for Hawaii and the US West Coast, which was later withdrawn.

The hardest hit areas were the independent island nation of Samoa and the US territory American Samoa as well as the Kingdom of Tonga. The superintendent of the National Park of American Samoa, Mike Reynolds, was quoted as having seen at least four separate waves, each about 15 to 20 feet high, rushing between half a mile and a mile inland. A five foot wave was said to have swept from the harbor at least 300 feet into Pago-Pago, the capital city of American Samoa. According to eyewitnesses, the coastal village of Sau Sau was completely destroyed by the waves. Some news reports even mentioned a thirty foot tall wave.

Most tsunamis are generated by sudden vertical movements of the seafloor. If certain types of earthquakes, thrust and normal fault quakes, occur at shallow depth below the seafloor, they can generate extremely rapid movement of the sea bottom. As a rule of thumb, the stronger the quake, the larger the area of displacement and hence the stronger the tsunami.

California's typical style of earthquake, the strike slip, rarely causes a tsunami, because the slip associated with this kind of quake does not have a significant vertical component. Earthquakes in subduction zones, however, are mostly of the two tsunamigenic types. The earthquake which caused the large tsunami in the Indian Ocean on Boxing Day in 2004 occurred in a subduction zone west of the Indonesian island of Sumatra. There the Indian Ocean plate dives under fragments of the Eurasian Plate, creating the Sumatra Trench. Tuesday's quake in the South Pacific happened in a location with a similar tectonic layout. It occurred at the top of the Tonga Trench, where the Pacific Plate dives under the Fiji Plate, a fragment of the large Australian Plate. This plate collision occurs with a speed of about 1.5 inches per year, which makes the area one of the most earthquake-prone zones on our planet.

Completely independent of the quake in the South Pacific, another strong temblor hit the city of Padang on the Indonesian island of Sumatra about 17 hours later. At least 75 people were killed in the earthquake, which had a magnitude of 7.6. The quake triggered several landslides in Western Sumatra, but did not cause a tsunami wave. Its epicenter lay south of the zone of the deadly quake that triggered the Indian Ocean Tsunami almost five years ago (hra043).