Sometimes it is easy for historians of science to exactly pinpoint the beginnings of a new field of research. The birth date of modern genetics, for instance, is considered to be April 25, 1953, the day when James Watson and Francis Crick published their paper about the structure of the DNA molecule in the British journal "Nature." The nuclear age began on December 17, 1938 in Berlin when the German chemists Otto Hahn and Fritz Straßmann for the first time split the nucleus of a Uranium atom. But when did the field of seismology start? Was it in 132 AD, when the Chinese scientist Zhang Hêng invented the seismocope? Or was it with the publication of the "Lawson-Report," comprehensively describing the effects of the Great San Francisco Earthquake of 1906? 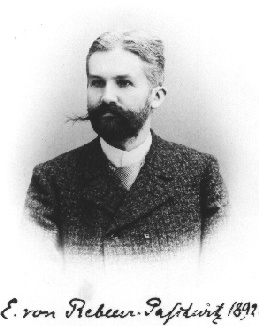 Well, sorry historians, stop searching for the cradle of seismology. Our field is a science which developed slowly over several centuries in many places with contributions by quite a few fine researchers. Nevertheless, in the history of seismology several days clearly stand out. One of those happened 121 years ago today.

Figure 2: The first recording of a teleseism.

The scene is the Astrophysical Observatory on Telegraph Hill in the Prussian City of Potsdam, near Berlin. There a German astronomer, Ernst von Rebeur-Paschwitz (Figure 1), had set-up a horizontal pendulum. He wanted to precisely measure the changes of the gravitational attraction on the Earth caused by the movement of other planets. But during the afternoon of April 17, 1889, at 5:21 pm to be precise, he saw his pendulum swing in an extremely strong, but still rather regular movement (Figure 2). At first, Rebeur-Paschwitz had no idea what had caused his sensitive instrument to swing so wildly. That puzzle was resolved a few months later, when he read a note in "Nature" about an unusually strong earthquake in Japan. It had occurred several hours before the wild swings of his pendulum. It was then when Rebeur-Paschwitz realized that his instrument had caught the seismic waves that were generated by the earthquake in Japan located more than 5,500 miles away from Potsdam.

Although the shaking of local earthquakes had been recorded several times before, nobody had ever registered the waves from a far away earthquake. The first recording in Potsdam of such teleseisms on April 17, 1889 marks the birth of the study of the structure of the Earth by means of seismic waves (see blog January 14, 2009). Unfortunately, Rebeur-Paschwitz did not live long enough to see the fruits of his detection. He died of tuberculosis a few years after his historic recording. (hra057)