Ever been to Death Valley and seen the fish? No, the blogger is not joking - there are fish in one of the driest and hottest places on Earth. Even if you don't believe it, these fish do indeed exist. They live in a unique, aquifer-fed geothermal body of water called Devil's Hole. It is part of the Death Valley National Park and it is aptly named, as the surroundings are nothing but grey, treeless, hot desert. The fish belong to a species of pupfish, Cyprinodon diabolis. Because they number only a few hundred, they are on the federal endangered species list. And recently, they got a major scare when their unique habitat was shaken by the strong waves generated by the magnitude 7.2 Baja California earthquake of April 4 (see blog April 5, 2010).

Well, we actually don't know if the fish were really scared, but what was captured by an automatic video camera seems to be scary enough. Researchers from the University of Arizona in Tucson installed the underwater video system to study the largely unknown spawning behavior of the pupfish. Normally the waters of Devil's Hole are as sedate as you can get. But when the earthquake hit, the poor little fish experienced a tsunami in the desert. Sediments were stirred up, and the water sloshed back and forth. To view the video, click here. 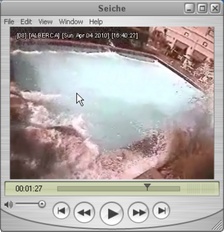 Video of seiche in hotel pool. (Click the image to play in .wmv format. Click here to play in .MOV (Quicktime) format.

It is by no means unusual for a small body of water to be wildly shaken by earthquake waves. Seismologists even have a word for it. They call these waves "seiches" (pronounced saysh) after the word for sloshing used in the French-speaking part of Switzerland. It was there, at Lake Geneva, that the Swiss researcher François-Alphonse Forel discovered these waves after an earthquake in 1890. Many lakes and lagoons have experienced such seiches. Some researchers even found traces of such waves at the shores of Lake Tahoe - 30 feet above today's waterline. This seismically-induced sloshing of water is by no means restricted to lakes, bays or Death Valley's Devil's Hole. The water in almost any swimming pool can be stirred by earthquake waves. How bad this can be was captured by a security video camera at one of the hotels in Mexicali, less than 50 miles from the epicenter of the Baja California earthquake. It caught the seiches in the hotel's pool induced by the earthquake's ground shaking. Be patient when watching the video, because nothing happens for the first 30 seconds -- but then, all hell breaks loose (hra058).