It was early Thursday afternoon, at 2:41 pm to be exact, when the Earth shook under Berkeley. Nothing was damaged, but the jolt was widely felt. At this time of the year, people here in the East Bay are always somewhat on the edge. Almost exactly 22 years ago, on October 17, 1989, the Loma Prieta quake hit and dozens of people died during the collapse of the double-decker Cypress Structure carrying freeway 880. Two years later, on October 19, 1991, the Oakland Hills firestorm claimed many more lives, and several thousand houses burned to oblivion. No wonder then, that long time residents of the area took cover when the latest temblor hit the area, even though it was mild compared to other temblors. Thursday's quake had a magnitude of 4.0 and was located on the Northern Hayward Fault more than 6 miles below the Clark Kerr Campus of UC Berkeley. It was felt over a large area in Northern California, from Santa Rosa in the North, to Sacramento in the East and all the way to Gilroy to the South. Within three hours of the quake, more than 15,000 people had reported their observations. If you felt the quake but have not yet reported, it is not too late. You can do so on the "Did you feel it?" website. Your report is important, because from the the collective observations, seismologists draw conclusions about the different ways the ground in the Bay Area shakes in response to seismic waves. 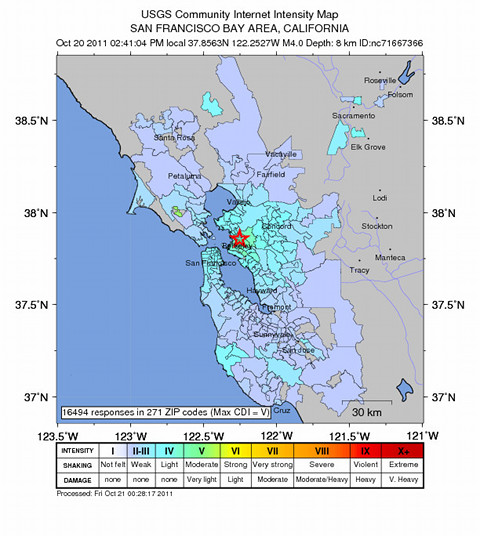 The quake was the strongest temblor to be felt in the Bay Area since March 1, when a quake with a magnitude of 4.5 struck the area near the Geysers hydrothermal area in Sonoma and Lake counties.

The quake under Berkeley behaved exactly the way seismologists expected. It was a strike slip motion along the Hayward Fault. The area west of the fault, that is, the lowlands of Berkeley, Oakland and Albany moved a few tenths of an inch to the North with respect to the Berkeley Hills. This northward movement is caused by the sliding of the Pacific Plate against the North American Plate. The Hayward Fault is one of the three major earthquake faults in the Bay Area which convey this plate movement. The others are the San Andreas Fault further to the West and the Calaveras Fault in the East. Even with a modest earthquake like Thursday's temblor, aftershocks can be expected. By 5 pm, two aftershocks, one of magnitude 1.8, the other a 2.2, had already occurred. Shortly after 8 pm, a third aftershock with a magnitude of 3.8 again rattled the nerves of the people in the East Bay. (hra064)