Late Saturday night, Oklahoma, a state more known for its destructive tornadoes than for earthquakes, was shaken by the strongest temblor in its history. An earthquake with a magnitude of 5.6 struck near the town of Prague in Lincoln County, about 40 miles east of Oklahoma City. It was preceded by a magnitude 4.7 foreshock, which occurred about twenty hours before the main event at almost the same epicenter.

The main shock caused damage to at least five homes, mostly when chimneys caved in. One man was reportedly injured when he tripped and hit his head while attempting to flee his home near Prague. U.S. Highway 62 buckled in at least two places during the quake, causing a sinkhole east of Meeker, but road crews repaired the damage overnight. The quake also damaged a 40-foot spire at St. Gregory University in Shawnee and ruptured a water pipe in Chandler.

These two quakes are, so far, the culmination of a very unusual series of temblors, which has been shaking Oklahoma since 2009. Last year alone, the Oklahoma Geological Survey recorded 1047 earthquakes in the Sooner State, more than a hundred of them were felt, mostly in the greater vicinity of the State's capital, Oklahoma City. While such numbers are normal for California and other earthquake prone regions, they are certainly unusual for a state in what geologists consider to be the stable part of the Nation. 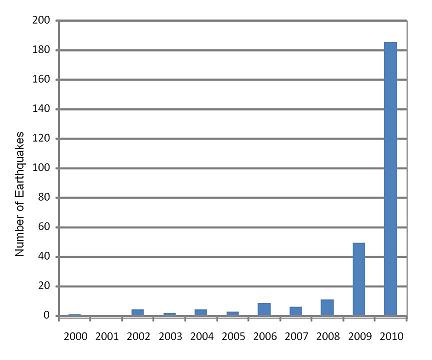 Even more puzzling to seismologists is the fact that these quakes are not associated with the only known earthquake fault in Oklahoma, the Meers Fault. It runs over a length of approximately 30 miles through Comanche and Kiowa counties in the southwestern part of the state. Geological studies showed, that this fault was active for the last time about 1300 years ago. It may then have produced an earthquake with a magnitude between 6.5 and 7.0.

Until Saturday's temblor struck the biggest recorded earthquake in Oklahoma occurred in 1952, when the town of El Reno, just west of Oklahoma City was shaken by a magnitude 5.5 event. Before Oklahoma became a state in 1907, a quake of similar magnitude struck in northeastern Indian Territory in 1882. The exact location of that tremor is unknown.

Saturday's late-night quake was slightly lower in magnitude than the one that rattled the East Coast on August 23. That 5.8 magnitude earthquake was centered in Virginia and felt from Georgia to Canada. No major damage was reported then, although cracks appeared in the Washington Monument. The National Cathedral suffered costly damage to elaborately sculpted stonework, and a number of federal buildings were evacuated. (hra066)