It's Swarming Under Concord 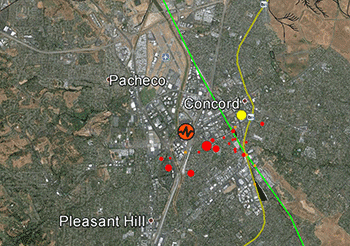 A map of recent seismicity in Concord, CA (red dots) and an M3.5 earthquake from July 2000, the last earthquake above a magnitude 3.5 in that region.
Source: Google Earth.

Since the Earth began to rumble under the East Bay City of Concord last Sunday, this town north of Mount Diablo experienced more than twenty little earthquakes....and the count is still on. What's shaking under Concord is called an earthquake swarm, which is different from a typical earthquake sequence. Usually a quake sequence starts with a fore shock or two, followed by the main shock and then dozens - or in the case of the Nepal earthquake almost two weeks ago - thousands of aftershocks. The characteristics of such a regular pattern is that the main shock is clearly the biggest temblor in the sequence. Earthquake swarms, however, are different because they do not have a clear, dominant main shock.

As an example, look at the current Concord swarm. The first quake in this series had a magnitude of 1.9. It occurred last Sunday morning shortly after 8 am. But what seemed to culminate in a 3.6 "main" event on Sunday afternoon around 3 pm, did not taper off in a typical aftershock sequence. Instead another event on Wednesday afternoon logged in with a magnitude of 3.5 - almost as strong as the one 72 hours before. Between these two quakes were lots of other events ranging in magnitude between 0.9 and 3.2 (red dots on map). Most of them were not felt, not only because they were small, but also because of their relatively deep focal depths. All of them were located deeper than 6 miles below the surface. They all originated in a very small volume of earth under Concord - and this clustering plus the fact that there was no dominant shock made them a swarm.

Why some earthquakes tend to congregate in a swarm and others develop into a regular sequence, has been the subject for scientific investigations for a long time - without any clear conclusion so far.

It is not only their swarm like behavior, which makes the current events under Concord somewhat unusual. This region of the Bay Area has not been known to produce many earthquakes. The last shaker with a magnitude larger than 3.5 occurred almost fifteen years ago in July 2000 (yellow dot on map). The biggest recorded event happened 60 years ago on October 24, 1955 and had a magnitude of 5.4 (red dot with black wiggly line in center of map).

The few earthquakes in this area are governed by the Concord Fault (green line on the map). This short fault segment stretches from Mount Diablo to the Carquinez Strait. It represents the connection between the Calaveras Fault in the south and the Green Valley Fault north of the river. Even though the Concord Fault is only 12 miles long, there is a three percent chance that it will produce a magnitude 6.7 earthquake in the next 30 years. (hra104)