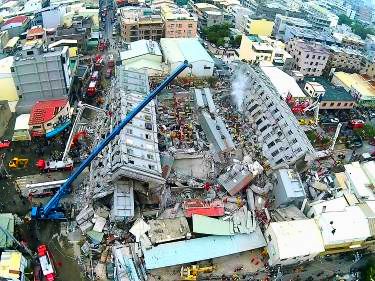 A singularity of destruction in a sea of normalcy: The collapsed Weiguan Jinlong residential building in Tainan after the 6.4 earthquake. (Photo: Taipei Times)

Pictures showing the destruction after a devastating temblor are never pretty. But the latest aerial photos coming out of the earthquake-struck city of Tainan in southern Taiwan are outright surreal. As far as the wide angle lens of the camera can see, the pictures show buildings which look undamaged and pristine. Only in the photo's center do two colossal grey apartment towers lie on their sides - keeled over as if they were felled like trees cut with a chainsaw. Rescue teams are still frantically searching for survivors. As of this writing more than one hundred people have been pulled out alive but more than 150 others are still missing, presumably trapped deep inside the fallen residential towers. The bodies of 13 residents who perished in the collapse have also been recovered.

To a seismologist's eye, however, this picture shows more than a surreal scene after one of nature's most devastating forces has struck. Why is it, one has to ask, that hundreds of buildings in Tainan's Yongkang District are intact while the twin 17-story towers of the Weiguan Jinlong residential building were left lying on their sides on Yongda Road when the shaking stopped? The earthquake itself, which occurred on Saturday shortly before 4:00 am (local time), had a magnitude of 6.4 and hence was only slightly larger than M=6.0 the South Napa earthquake of August 24, 2014.

According to the Central Weather Bureau, Taiwan's government agency tasked with seismic monitoring, the peak ground acceleration caused by the quake's seismic waves did not exceed more than 30 percent of a "g", the standard gravitational pull of the Earth. Seismic engineers call this amount of shaking "moderate". It will certainly be felt but should not lead to a catastrophic building failure, particular in a country like Taiwan, which has one of the most stringent earthquake resilient building codes in the world. 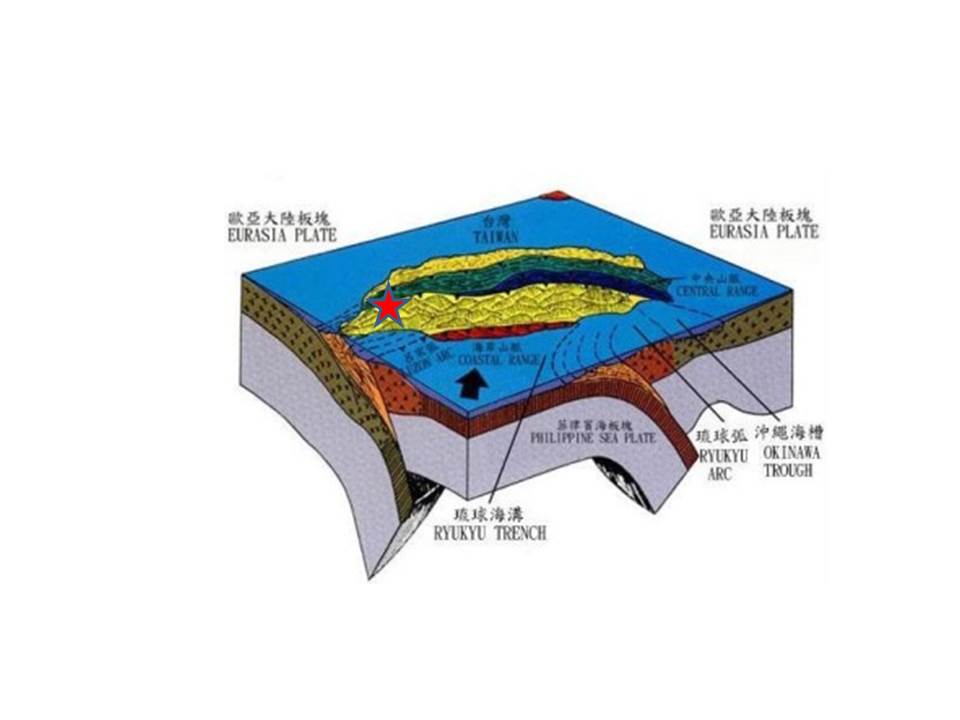 Even though the blogger does not know the history of the Weiguan Jinlong residential building with its 96 apartments, something seems fishy: Damage in cities hit by moderate or strong earthquakes is never concentrated just in a single building. If only one building fails catastrophically and everything else is left standing with only cosmetic damage, one can only assume that the structure had a fundamental flaw in its design, or that its construction was very shoddy.

The reason that Taiwan has such stringent and mostly well enforced building codes is the island's location. The country sits on one of the tectonically most complex regions in the world, at the boundary between the Philippine Sea and Eurasia plates. There the two plates converge with a velocity of about 3 inches per year. However, the collision of the two plates is not straight forward subduction like under South America. North and east of the island, the Philippine Sea plate subducts beneath Eurasia along the Ryukyu Trench. South of the island, the South China Sea (on the the Eurasia plate) subducts beneath the Philippine Sea plate in the Manila Trench.

Besides the earthquakes associated with this complex subduction, Taiwan is often pummeled by temblors originating within the island's crust itself. Taiwan is dissected by a major north-south trending fault, which leads to devastating thrust earthquakes. The strongest of these occurred in April of 1935 and cost 3200 people their lives. The location of the so called Chi-Chi Earthquake on September 21, 1999 was also on this thrust fault, its epicenter a mere 60 miles from Saturday's quake. It had a magnitude of 7.6 and more than 2500 people were killed. The Taipei Times, an English language newspaper in Taiwan, reported on Sunday that the company which built the now-collapsed towers in 1994 was also involved in the construction of some of the structures which collapsed during the Chi-Chi earthquake. (hra115)