Shaking Down the Middle

The earthquake series, which has been striking the center of the southern Japanese island of Kyushu since Thursday (local time), has led to the largest seismic disaster in this East Asian country since the Great Tohoku Earthquake five years ago. As of this writing, at least 41 people have been killed and more than a thousand were injured. Many buildings in Kumamoto prefecture are destroyed. In addition, strong rains over the weekend caused massive landslides which are hampering the rescue efforts. Since the series of shallow quakes started, nearby Mount Aso, the largest active volcano in Japan, has belched gas and ash in several small eruptions. The strongest quake in this series so far measured 7.0 on the magnitude scale. Several foreshocks, which caused initial substantial damage in the city of Kumamoto, had magnitudes between 6.0 and 6.4. 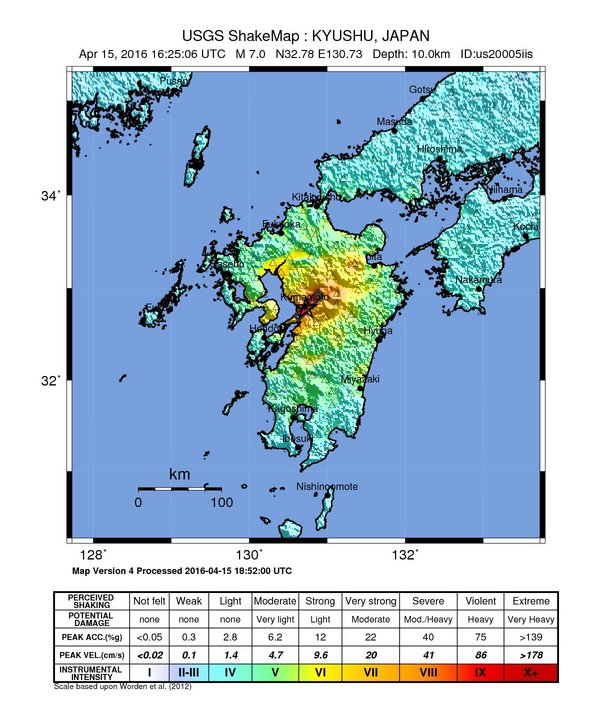 This map shows the intensity of the shaking associated with the latest magnitude 7.0 quake in the interior of the Japanese island of Kyushu. The strongest acceleration with 80 percent of "g" was measured in the city of Kumamoto (red region).

The whole island chain of Japan has one of the world's largest seismic hazards. The reason: Three large tectonics plates collide under Japan and its surrounding seas. Moving in from the east with speeds of 3 to 3.5 inches per year, the Pacific and the Philippine plates ram into the plate which carries the eastern Eurasian continent. A mere 150 miles southeast of Tokyo the three plates meet at a single point, called a triple junction.

North of this point, the Pacific Plate dives under Eurasia with the Japan trench forming the boundary line. This subduction process can generate massive megathrust earthquakes, like the infamous Kanto Earthquake, which leveled large parts of Tokyo and Yokohama in 1923 and the Tohoku earthquake of 2011. South of the triple junction the Japan trench becomes the Izu-Bonin trench, defining the grounding line of the subduction of the Pacific under the Philippine plate. Some of the deepest earthquakes in the world occur there.

Southwest of the triple junction, the Philippine Plate dives under Eurasia along the Nankai trough, which parallels the axis of the Japanese island chain. Like its cousin further north, this subduction zone is also capable of generating massive megathrust quakes with magnitudes exceeding level 8.

However, the subduction zones along the eastern edge of Japan are not the country's only seismic hazard. The west coast facing the Sea of Japan is pummeled by strong earthquakes as well, like Niigata prefecture on the west coast of Honshu with a magnitude 7.6 temblor in 1964. Here it is not subduction but extension which puts the Earth's crust along Japan's west coast under enormous stress - hence generating the earthquakes.

And finally the center line of the Japanese island chain has its own seismic hazard. This is not surprising, given the fact that large tectonic forces are gnawing at both sides of the relatively narrow island chain. Being squeezed by the pushing and shoving of the tectonic plates, the middle of the islands are also under great stress. 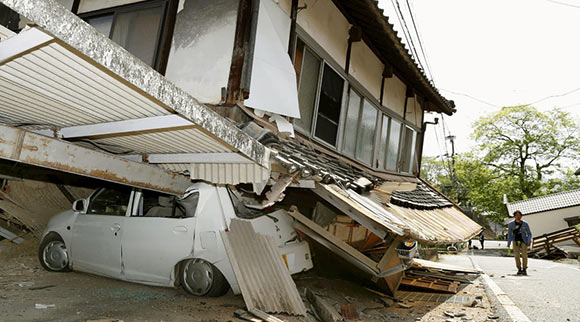 This house in Kumamoto prefecture collapsed because it has a "soft story". This term refers to the fact that the ground floor is a garage with essentially no resistance to the shear forces generated in an earthquake.

This zone of faults and weakness is called the "Median Tectonic Line." It stretches for more than 500 miles through Kyushu and and the main island of Honshu to the north. The source of the devastating earthquake in 1995, which took more than 6000 lives and caused severe damage in the city of Kobe, was located in this zone.

The current Kyushu quakes are also result of the stress field in the interior of Japan. They occurred along the intersection of two faults east of the city of Kumamoto. In contrast to the subduction quakes, the interior earthquakes are relatively rare. According to the earthquake catalog administered by the US Geological Survey, only thirteen quakes with magnitudes of more than 5 occurred in the center of the island of Kyushu during the last century.

Because their focal depths are shallow, less than 7 miles, these quakes can cause much damage. The Meteorological Agency, which monitors the seismicity in Japan, measured the shaking of the latest magnitude 7 quake with the unusually high value of more than 80 percent of "g," the standard gravitational pull on the Earth's surface.

Japan is not the only seismically active island country, where such an interior stress field adds to the seismic hazard. Similar "Median Tectonic Lines" exist in Taiwan and on the Indonesian island of Sumatra. (hra118)