At the beginning of the 1900s, Enrico Caruso had already become a legend in music. The Italian tenor had taken the world of opera by storm with his elegant performances on the stages of the most famous opera houses in Europe. Hence it was not surprising that Caruso's first ever appearance in San Francisco was celebrated all over town. On Tuesday, April 17, 1906, Caruso sang magically as Don Jose in Bizet's opera Carmen on the stage of the city's new opera house. The building, illuminated brilliantly by what was then the novelty of electric light, took up a whole block of Mission, between Third and Fourth, roughly where the Yerba Buena Gardens and the Metreon are located now. When the performance ended at around 10:30 pm, the audience erupted in ecstatic applause - not knowing that less than seven hours later their city would change forever.

At 5:12 am next morning, exactly 110 years ago today, a section of the San Andreas Fault just off the Golden Gate began to break. Over the next two minutes or so, the rupture propagated for a total of 296 miles. The ground along the fault shifted all the way to Shelter Cove in the North and to San Juan Bautista in the South. The maximum offset of 20 feet was later measured near the town of Olema at Point Reyes. The City and all of Northern California were shaken violently by this quake which - if measured with today's technology - would have registered as a 7.8 on the magnitude scale. Caruso, who spent the night after his performance in a suite on the fifth floor of the Palace Hotel, described the shaking as if "an ocean liner was tossed around by heavy seas." Looking out the hotel window, he saw buildings collapse and people buried alive by brick walls, which came tumbling down. The frightened tenor left the City in a hurry a few hours later, and hence escaped before the second act of the disaster took its even more destructive course than the first. 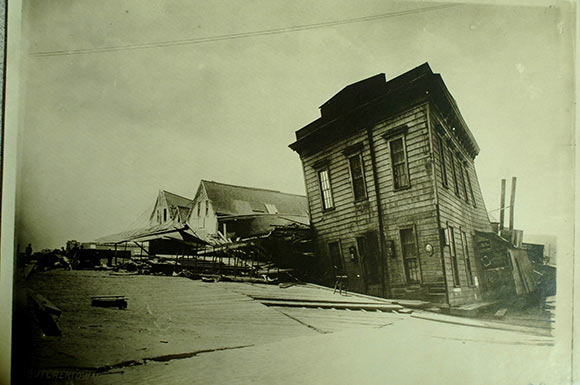 The shaking from the earthquake liquified the ground under parts of San Francisco. Many houses, like this one in Butchertown, sank into the mud. (Click to view larger.)Photo: BSL Archive

Despite Caruso's observations, San Francisco with its 400,000 inhabitants had fared reasonably well during the strong shaking. While other towns in the area, like Santa Rosa, San Jose and Salinas lay in ruins, the shaking itself had not devastated the City even though there was a lot of damage. This assessment, however, changed dramatically when the fire brigades in San Francisco realized that they had hardly any water to extinguish a number of small fires, which had spread from fireplaces as a consequence of the quake. The reason for the dry fire hoses: Except for one, all main water lines in the city had been destroyed by the shaking. Within a day the small fires consolidated into a giant conflagration, which ravaged the city for more than 48 hours. When the flames finally ran out of fuel, most of San Francisco was no more - the city had become a burnt wasteland with more than 80 percent of its buildings destroyed.

Two months after the quake, the Lawrence Company of Chicago moored an air ship 2000 feet above the Bay and took pictures. The City was still in ruins. The center line in this panoramic view is Market Street. The Golden Gate is on the right - without the iconic bridge, which was built about 30 years after the 1906 quake. (Click to view larger.)

Large devastating fires are not uncommon after a strong earthquake has hit a densely populated area. In fact, such fires are the largest secondary risk with a much greater damage potential than the quake itself. Here are a few examples: A conflagration raged through Portugal's capital Lisbon after it was hit in 1755 by one of the strongest quakes ever measured in Europe. The Japanese cities of Tokyo and Yokohama fared even worse after the "Great Kanto Earthquake" of September 1, 1923. This quake, with an estimated magnitude of 7.9, struck the east coast of the Japanese main island of Honshu right around noon, when many people were preparing their lunches over open flames. As in San Francisco 17 years before, the small fires merged into firestorms which burnt whole neighborhoods. In one single incident, more than 38,000 people who had sought shelter in an army depot in downtown Tokyo died, when the depot went up in flames in a so called fire tornado. In the two days it took to extinguish the fires in Tokyo, almost 100,000 people lost their lives.

How would a densely populated region like the Bay Area fare today, if we were struck by a strong earthquake with resulting fires? In a scenario simulating a magnitude 7 quake along the Hayward Fault in the East Bay, emergency planners paint a very bleak picture regarding fires. Most of the aquaducts which carry our water from the reservoirs in the Sierra Nevada would break in the simulated quake, because they cross the Hayward Fault. This would disrupt the water supplies to most hydrants in the East Bay. With dry hydrants, no fire company can operate. Pumping water directly from the Bay itself is not an option, because no fire company has enough pumps and hoses to make up for the dry hydrants. As a result of the worst case simulation, more than 150,000 single family homes in the East Bay could be destroyed in fires after an earthquake. Even if all people were to escape the fires unharmed, the total losses and repair costs would add up to the staggering amount of $80 billion. And rebuilding all those residences could take a decade or even longer. (hra120)