An Icon of Plate Tectonics - Erased for Now

It is not for naught that we call the Hayward Fault a "tectonic timebomb in our backyard". Almost 150 years have passed since the last major earthquake rattled the fault itself and, in fact, the entire San Francisco Bay Area. It was in October 1868 when the Hayward Fault last shook off its tectonic load in what is now estimated to have been a magnitude 7 earthquake. Since then plate tectonics has continued its relentless job: Mechanical stress generated by the eternal the movement of the Pacific Plate relative to North America has again accumulated along the Hayward Fault. In fact, so much potential seismic energy has been stored since 1868, that this tectonic demarcation line along the foothills of the East Bay now has the greatest probability for a big shaker in all of Northern California.

Although the Hayward Fault currently poses the largest seismic hazard of all Bay Area earthquake faults, to the layman it remains something of an enigma. Despite numerous published maps and even virtual tours on Google Earth, its exact location seems hidden deep beneath the urban jungle of the East Bay. There are however a few places, where the fault reveals itself at the Earth's surface. The cause: In some of its sections the fault responds to the ever increasing tectonic load by subtle creep. Instead of waiting for the tectonic stress to be released in a sudden explosive quake, in a few places the ground at the fault gives way in a slow crawl along the fault line.

For the uninitiated, it takes a little training to find the subtle marks with which the creeping fault expresses itself. On the campus of Contra Costa College in San Pablo, the fault is visible through pavement cracks and offset curbs. There, a patio area next to Campus Circle bears an especially interesting mark of the fault's creep. Its bricks, originally laid in a straight and rectangular design, have been moved by the fault and now exhibit a clearly curvy pattern. While most of the fault line is covered by urban infrastructure, it also cuts through the Oakland Zoo, where it runs past the otter tank and a bear pen. 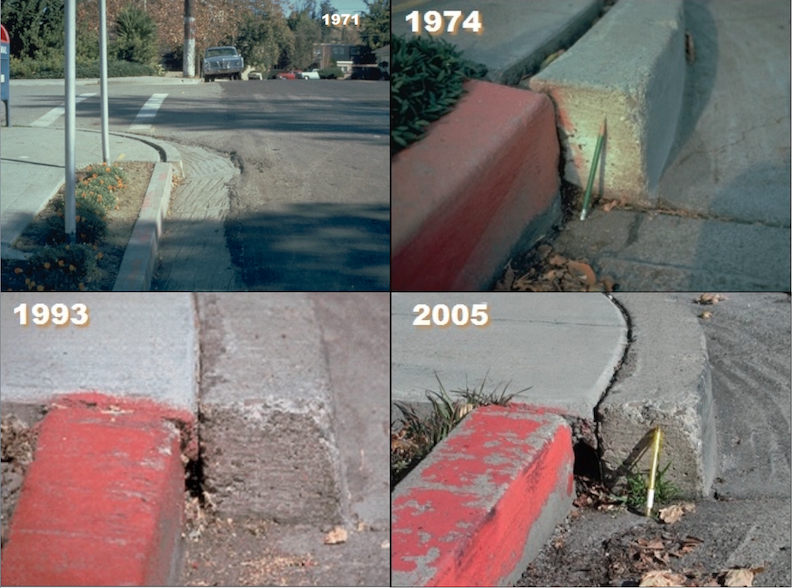 Over the decades the steady creep of the Hayward Fault has moved apart the two curbs at the intersection of Rose and Prospect streets in Hayward - making it a world famous icon of the restless Earth.

The upper section of the UC Berkeley campus straddles the fault as well. Some of the residence halls near the Greek Theater and the Memorial Stadium at the foot of Strawberry Canyon are built either directly on or just a few yards off the surface trace of the fault. The effects of fault creep in the stadium are clearly visible in the concrete wall above section KK in the south curve, where two sections of the wall have separated from each other by more than a dozen inches.

Some of the most impressive displays of the fault's creep can be seen in downtown Hayward. Less than half a block east of Mission Boulevard, parking lots and roads are full of characteristic cracks, which align themselves along the fault in a staggered fashion called "en echelon pattern". The curbs of nearly every residential street which crosses the fault are offset by a few inches. Nowhere was this clearer than at the intersection of Rose and Propect streets. Since 1971, and perhaps earlier, geologists and laymen alike have documented how the fault has been separating two segments of the curb, inch by inch (see sequence of pictures). Hundreds of students from colleges all over the world have marvelled at this otherwise unremarkable intersection, where plate tectonics could be seen in action. Over the years, the offset curbs at Rose and Prospect had moved more than 7 1/2 inches away from each other - a crawl which made them an icon among geologists. They were one of the few places in the world, where the restless Earth could be easily observed in an urban environment. 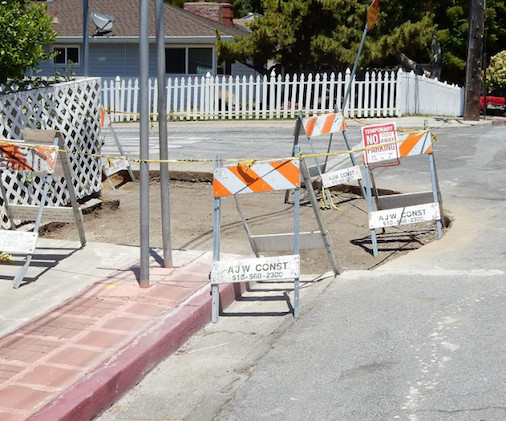 But this icon is no more. During the last few weeks a contractor has straightened out the curb and replaced it with a wheelchair-accessible ramp. While making the sidewalks safe for people with disabilities in itself is a good thing, nobody in Hayward's city government understood that in doing so they destroyed a world famous marker pointing to the earthquake fault that bears the city's name. "We just weren't aware of it", assistant city manager Kelly McAdoo told the Los Angeles Times. Adding that it is the administration's mandate from the City Council to have safe sidewalks, accessible for all members of the community.

To Earth scientists, the erasure of the iconic curb is a loss indeed. But thinking in the longer time frame of geology, the loss is only temporary: Because we know that even the City Council of Hayward cannot stop the lithospheric plates from moving. As soon as the concrete under the new ramp has cured, the creeping fault will begin to tag and tear and the curbs will be on the move again. In a decade or so, the Hayward Fault will again have visibly left its mark. (hra122)