An Earthquake of Two Flavors

Not all earthquakes are created equal. Instead, there are certain distinct flavors of earthquakes. In temblors "California Style" the two flanks of an earthquake fault slide past each other horizontally with no or only very little vertical movement. This flavor is called "strike-slip". In other quakes, the movement of one of the blocks of a fault is mostly down - called "normal" faulting - or up, dubbed "thrust" faulting. And then there are earthquakes which combine some horizontal with some vertical movement. They are of a flavor called "oblique". But no matter what the flavor and no matter what the magnitude: The vast majority of earthquakes are of just one kind. When a quake starts as strike-slip, it stays the same flavor throughout the duration of the fault rupture. The same is true for the other flavors, i.e. what starts as a thrust ends as a thrust with no changes in the orientation of the fault movement in between. 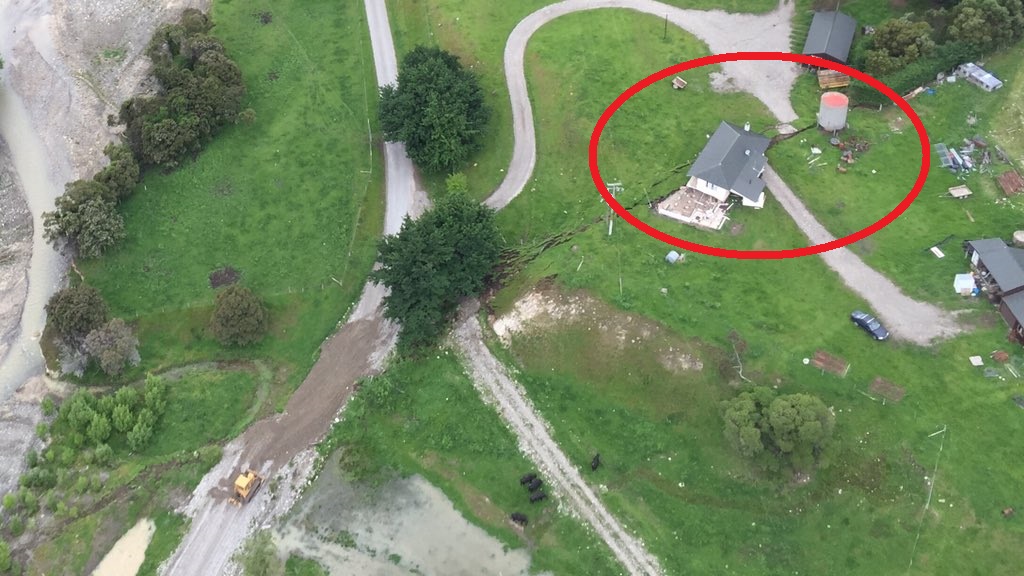 The huge earthquake, which struck the northern part of New Zealand's South Island ten days ago, was one of the few exceptions from this general rule. With a magnitude of 7.8, this quake was not a mere dot on the map, as earthquakes are usually depicted. Instead it ruptured along a plane in the Earth's crust, which was about 130 miles long and approximately 20 miles deep. This fault plane extended from the epicenter, a point in the Kaikoura Range just south of the Waiau River 60 miles north of Christchurch, all the way into ocean between the two islands.

In many places, the rupture extended all the way to the Earth's surface, which gave Earth scientists a unique view of the complex processes which happened inside the crust during this big temblor. And what a surprise they found! In the valley along the Kekerangu River about 75 miles north-east of the epicenter the geologists saw a farmhouse ripped off its foundation by what is clearly a right-lateral strike slip movement (see figure 1). During this California style rupture, the two flanks of the Kekerangu Fault were offset by approximately 30 feet, as can be seen in figure 1 at the torn-apart driveway between the house and the water tank. In comparison: The maximum horizontal strike-slip movement during the 1906 San Francisco earthquake was about 18 feet near the town of Olema in Marin County. In fact, the offset of 30 feet is about the largest coseismic slip a strike-slip fault on land has ever produced.

Figure 2: Looking down over the cracks in the road. The side on which the photographer is standing was uplifted by almost 8 feet.

But the surprise got even bigger, when survey teams reached the coast north of the town of Kaikoura, famous for its whale watching tours. There rocks and reefs which had been under water even at low tide were exposed by up to 8 feet above the water line. The coastal road and the railroad along the shore had been uplifted in the same way (see figure 2). No strike-slip earthquake would produce such an uplift. This can only happen in thrust faults, where one flank of the fault is pushed up.

Just looking at the pictures suggests that this earthquake changed its flavor during the rupture. It started out as a strike-slip and then converted into a thrust movement, which also generated a small tsunami. Since the earthquake happened, these observations have been confirmed by two different geophysical measurements. Analysis of both high precision GPS recordings and radar signals from satellites has shown that this quake has indeed expressed itself in two flavors. The reason for this peculiar behavior became clearer after seismologists in New Zealand attempted to model the rupture process using a variety of physical models for the earthquake source. The quake happened exactly at the tectonic link which connects two major earthquake features in New Zealand. It occurred in the transition zone between the fault associated with the Pacific Plate subducting under the Australian plate along the east coast of the North Island and the Alpine Fault, which runs for almost 400 miles up the spine of the South Island. While the Alpine Fault is similar to the San Andreas Fault as it produces right-lateral strike slip earthquakes, the subduction zone is capable of erupting in major thrust earthquakes - exactly the two flavors observed in this remarkable quake. (hra132)