Of Ghost Towns and Explosions

In these cold winter days, the ghost town of Bodie is even ghostlier than usual. Located east of the Sierra Nevada north of Mono Lake, the hamlet became a boomtown in the 1880's after a prospector named Waterman Body discovered gold in the barren hills of this remote area. During the middle of last night it got even spookier amongst the uninhabited, windswept buildings. Within one hour the town and its surroundings were rattled by three earthquakes with similar magnitudes of around 5.7. Their epicenters lay about ten miles northeast of Bodie just across the Nevada border. These significant shakers did not cause any damage in the ghost town, but were felt over thousands of square miles from Chico in the north all the way to Fresno and Visalia in the south. Because a quick glance at the map of active earthquake faults does not reveal anything in this area, speculations about the cause of these good size temblors and their dozens of aftershocks immediately popped-up in social media. 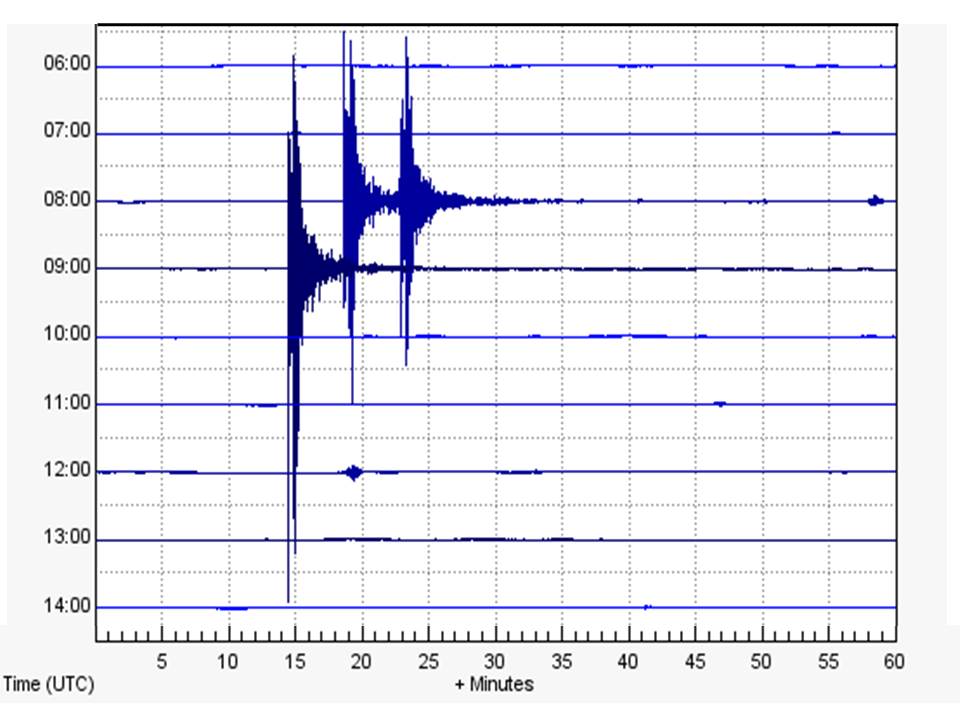 The three earthquakes of similar size (magnitude around 5.7), which shook Hawthorne Nevada last night, as recorded by the Berkeley Seismological Laboratory seismic station HELL in the Sierra Nevada near Kings Canyon National Park.

There is reason to speculate indeed. After all, the epicenters are very close to the Aurora Volcanic Field. The Aurora Crater, less than a mile away, is an impressive one mile wide crater completely surrounded by lava flows. The lavas of the Mud Springs volcano, located slightly to the east of the epicenter, flowed for more than four miles, leaving behind a crusted, barren landscape. Could it be that the latest earthquakes are associated with a reawakening of the Aurora Volcanics? Well, anything is possible within the interior of the Earth, but the last eruption in this field was about two million years ago and no signs of any magmatic activity have been observed recently.

And then there is the area to the northeast of the epicenter. Just south of Walker Lake, the US Army operates the largest ammunition depot in the world. An area of 230 square miles is dotted with almost 2,500 bunkers in which millions of pounds of conventional explosives are stored: from rifle bullets to mortars, artillery shells and much more. Even though the depot has been spared any major accidental explosion since it was established in 1930, there is enough fire power stored in the area to blow up all of Nevada several times over. Depending on the circumstances, obsolete ammunition is detonated in a controlled fashion several times a week. This detonation hot spot is marked on aeronautical charts as restricted area R-4811, helping pilots to avoid getting caught in the blasts. Could the earthquakes have actually been accidents on the Army Depot? Even though there is some secrecy involving the depot, news of such major explosions would have been leaked by now. 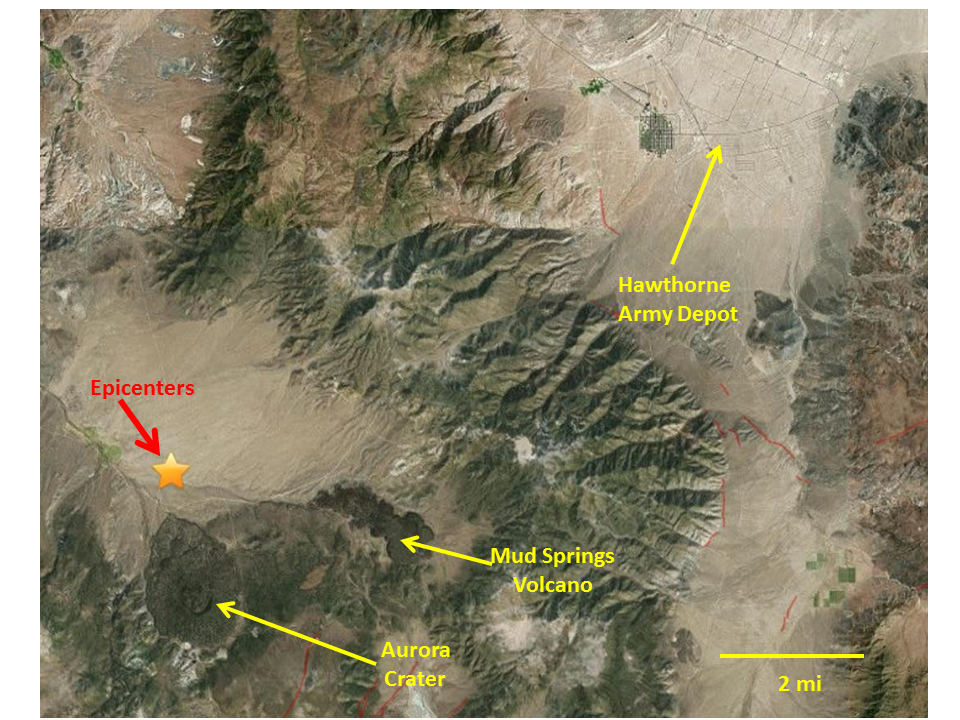 So, what caused the quakes then? The epicentral area is part of what is geologically known as the Basin and Range Province. This area, which stretches from the east of the Sierra Nevada all the way to Utah, is a zone where the Earth's crust is expanding. It is characterized by a sequence of long, deep valleys - the basins - and running parallel between them high mountain crests - the ranges. The crustal expansion is accompanied by a large number of earthquakes. During the five year period between 2010 and 2015 alone, the Nevada Seismological Lab at the University of Nevada in Reno registered more than 18,000 quakes of magnitude 1 and greater. Most of these events come in swarms and short sequences.

One of these swarms shook the area southwest of Hawthorne in the spring of 2011. At least nine of the more than 5,000 temblors recorded during that time had magnitudes of four and above. These quakes were located in the same epicentral area as the one which shook Bodie and its environs last night. All indications are that the latest quakes are a new manifestation of the tectonic movement within the Basin and Range province. The earthquake sequence more than five years ago lasted about two months. At the end of April 2011 the Earth near Hawthorne quieted down again. Hence it is very likely that Bodie and the ammo bunkers will be shaken for a few more weeks, before every thing calms down again - except for the occasional detonations of obsolete Army ordnances. (hra134)