The question of whether it is wise to live below a dam behind which millions of acre feet of water are stored is usually rather low on people's lists of daily worries. Most dams are constructed well and they are built for eternity. However, when you live in earthquake country, you might want to give the question a second thought. More than once have dams failed or were overtopped due to the shaking of large earthquakes - with devastating consequences for the people living downstream. Forty-six years ago today, the possibility of such a sudden dam burst was the hair-raising fear, in the chaos and devastation following the magnitude 6.7 earthquake that struck the San Fernando Valley north of Los Angeles. The quake took place at 6 am under the town of Sylmar. It caused hospitals and schools to collapse, brought down sections of elevated freeways and cost 64 people their lives. It was the first strong quake to hit the area since the 1893 Pico Canyon quake, with an epicenter several miles west of Sylmar. 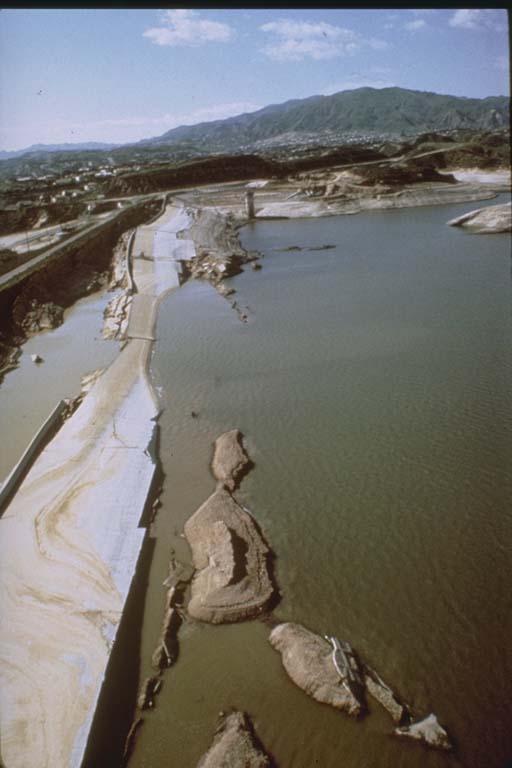 Figure 1: After the partial collapse of the Van Norman Dam in the San Fernando earthquake, the water came dangerously close to overtopping the dam.
Photo: E. Leyendecker, USGS

Once the shaking was over and rescuers started to assess the damage, the imminent fear of a new catastrophe arose: The Van Norman Dam just northwest of the town of San Fernando, where 3.6 billion gallons of drinking water were stored, was severely damaged. This earthen dam had partially liquefied and the top 30 feet of the edifice had crumbled. More chunks of earth collapsed with each new aftershock, reducing the height of the crown and bringing the water table dangerously close to the top of the dam (see Figure 1). As the dam might collapse further and then be breached by the enormous pressure of the water behind it, authorities decided to evacuate an area of 10 square miles along the San Diego Freeway. More than 80,000 people living downstream had to leave their homes for four days, while engineers frantically shored up the dam and lowered the water level. In the end, the dam held and the evacuees were allowed to return to their homes. Later, scientists at UCLA estimated that flooding following the collapse of the dam could have killed between 70,000 and 120,000 people.

When seismologists checked their records they were utterly surprised. In some areas of the epicentral region the ground had shaken so violently that seismic sensors recorded accelerations of more than 1.25 g, where g is the standard gravitational acceleration at the Earth's surface. Objects under such forces would have been weightless for a few seconds, like astronauts in space. Never before had such a strong acceleration been recorded in an earthquake.

Even more surprising was the location of the focus of the quake, which later came to be known as the San Fernando earthquake. Geologists had known for a long time that the San Gabriel Mountains above the San Fernando Valley were riddled with faults. But it was generally accepted that none of these demarcation lines between two separate geologic units were active, meaning that they had not produced any earthquakes recently. But when seismologists checked the epicentral area they realized that for about 6 miles a fault along the foothills of the San Gabriels had broken through the surface during the quake. In some areas it was offset more than 5 feet. The two geologists Carl Wentworth and Robert Yerkes from the US Geological Survey in Pasadena later wrote that "the San Fernando fault was discovered to be active only when it ruptured the ground surface on February 9, 1971. It is evident, however, that more faults in the San Fernando Valley area may be active today than are now recognized." 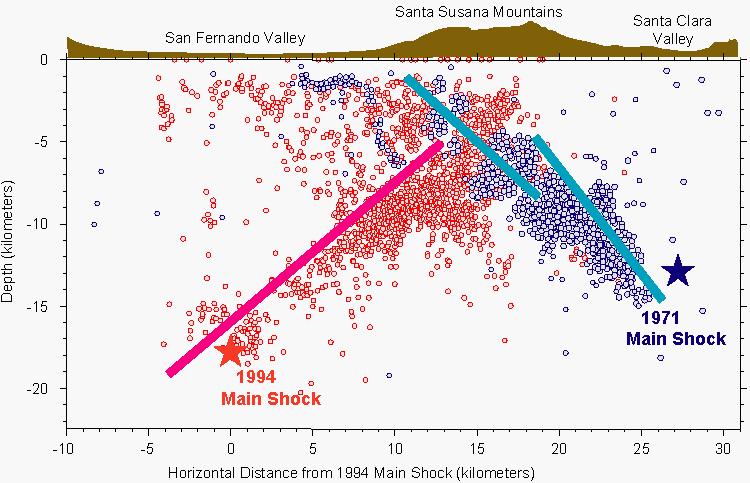 Figure 2: Earthquakes on two blind thrust faults caused severe damage in the San Fernando Valley. The red line is the fault on which the Northridge quake occurred in 1994. The two blue lines mark the faults which ruptured in the San Fernando earthquake 46 years ago today. The colored dots represent locations of the respective aftershocks of each quake.
Source: USGS

How right they were was demonstrated 23 years later, when almost the same areas of the San Fernando Valley were again struck by a damaging earthquake. During the Northridge earthquake in January 1994, more than 50 people were killed and the quake caused damage worth $35 billion. It also occurred on a hitherto unknown fault, albeit a different one from the San Fernando fault (see Figure 2). Such faults, which are unknown but can produce devastating quakes, are called blind thrust faults. Following these to earthquakes, geologists are now sure that many more of these hidden faults crisscross deep beneath the San Fernando Valley. But even now, after further detailed studies, they are not sure whether they have identified all blind faults in the area or if the valley's inhabitants are in for more surprises. (hra135)