Petrolia is - by any measure - the tiniest of hamlets in California. Hidden deep in the woods of the Mattole River valley in Humboldt County only one extremely windy road in rather poor condition connects it to the rest of the world. On this road you can either drive 33 miles north through the very remote country of the Lost Coast until you reach the touristy town of Ferndale. Alternatively you wind your way on an even longer journey south to Garberville, where you can catch the Redwood Highway. While Petrolia appears as a sleepy hamlet today, it was in the forefront of the most modern technology in the mid 1860's, which was drilling for oil. The first ever oil wells in California were drilled near this town along the North Fork of the Mattole River. In 1865 they produced up to 30 barrels of fine crude per day. However, oil boom was short lived because the wells dried up rapidly.

Figure 1: This map shows all quakes with magnitudes of more than 6 near the Mendocino Triple Junction in the last 36 years. The epicenter of the 1992 quake is marked by the red star near the lower right corner of the map.

But that was not the end of the "geologic history" of Petrolia. Shortly after 11 am on April 25, 1992 the town and with it the greater part of Northern California were shaken by the strongest earthquake the Golden State had seen in almost 40 years. The epicenter of this quake with a magnitude of 7.2 was only 2.5 miles east of Petrolia. The town suffered severe damage: the one hundred year old General Store, the original Post Office, which had opened in 1863, and a gas station burned down. The volunteer fire brigade could not extinguish the flames, because the shaking of the quake had shifted the fire house so badly, that its garage door jammed and the fire engine was stuck inside.

Elsewhere in Northern California more than 350 people were injured and several hundred homes were badly damaged. The quake and its two M=6.5 aftershocks caused the shopping center in the lumber town of Scotia to burn down. Travel was tricky in Humboldt County, because massive land slides caused by the seismic shaking had damaged or blocked roads. Near the epicenter a seismic sensor recorded a maximum acceleration of 2.2 times "g", the standard gravitational acceleration on the Earth's surface. At that time, this value was the strongest acceleration ever measured in an earthquake. It was strong enough to bounce a big Caterpillar tractor mired in the mud up to its axle into the air and bring it down a foot away without leaving a track in the ground.

At the coast a few miles west of Petrolia the ground had moved permanently. Along a 15 mile section, the quake had lifted the ground by up to five feet creating a new coastal terrace. This so called "coseismic uplift" was measured without the help of expensive scientific instruments. The rocks in the intertidal zone had moved upward, leaving sea urchins,barnacles, mussels and other creatures hanging high and dry. After a few days above water these marine organisms died, which allowed scientists to measure the extent of the uplift by recording what one researcher called the "vertical extend of mortality". 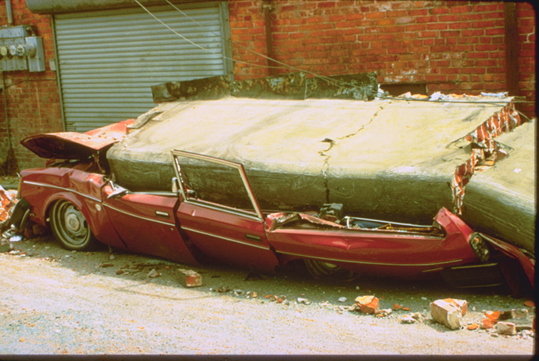 Figure 2: Be careful where you park when you are in earthquake country. This expensive sedan was flattened when the brick facade of the Valley Grocery Store in Ferndale came crushing down during the earthquake in 1992. The driver had just run inside to buy a pack of cigarettes.

This coastal uplift also caused a modest tsunami. The nearest tide gauge inside Humboldt Bay recorded a 10 inch surge and Crescent City, about 100 miles away, detected a 20 inch peak. Eyewitnesses on beaches however suggested that the peak water height was about a 3 feet. The tsunami arrived in Humboldt Bay less than a half hour after the earthquake and even earlier on the beaches in Southern Humboldt County. It was the first near-source tsunami ever recorded along the West Coast. Despite its modest size, it raised awareness of the near-source tsunami hazard and led to the establishment of the National Tsunami Hazard Mitigation Program.

The earthquake of 25 years ago today was by no means a singular event. Since 1873 at least eight quakes with magnitudes greater than 6 have been recorded in this area. We have explained the cause of the high seismicity rate in this area several times in this blog. The region around Petrolia, Cape Mendocino, and Punta Gorda, which are all just 10 miles from each other, is not only the northern terminus of the San Andreas Fault. There the interaction between the Pacific and the North American plates fundamentally changes its character. While the two plates scrape by each horizontally along the San Andreas Fault, a subduction zone begins north of Petrolia and Cape Medocino. There the Gorda and further north the Juan-de-Fuca Plates dive under the North American continent. Because of this complex tectonic dance of the various plates, a lot of stress accumulates in the region and frequent earthquakes are the consequence.

This area at the westernmost extension of California is also known as the Mendocino Triple Junction, because three large lithospheric plates meet in this region. But if you ever travel to Petrolia, you will not see any sign or marker, which points to the geologic significance of this location. Townsfolk wouldn't like such a unique form of advertising anyway. They would rather be left alone and don't want any fuss about the fact that no one else in California is shaken by earthquakes as frequently as the people in Petrolia. (hra139)