Seismic waves, it is often said, are the messengers which earthquakes send around the world. Generated at or very near a temblor's source, they contain information about the goings-on during an earthquake rupture. If the quake from which they originate is strong enough, seismic waves may also bring with them destruction and mayhem when they hit populated areas. All seismic waves, however, are very much affected by the geologic conditions along the path on which they propagate through the interior of the Earth or along its surface. Over the last century, we seismologists have learned to use this information stored inside seismic waves to illuminate the inside of the Earth, similar to a physician using X-rays to "look" inside a human body. We have found, among many other things, that our planet has a metallic core, part of which is fluid, part of it solid. In fact, seismic waves have become the most reliable source for gathering information about the conditions inside the Earth. 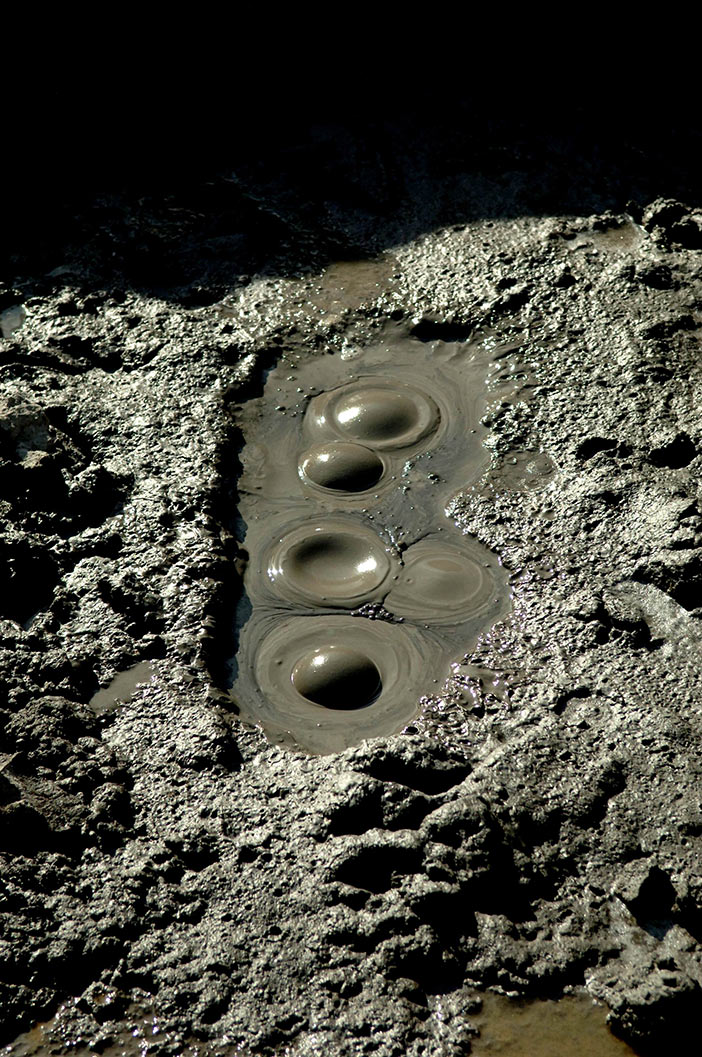 Gas and hot steam escape in the geothermal field along the southern shore of the Salton Sea resulting in bubbling mud. Photo: Horst Rademacher

That not only applies to the deep, otherwise completely inaccessible interior. Seismic waves can also be used to obtain information about the conditions in the first mile or less beneath our feet. This is what a group of researchers from the Berkeley Seismological Laboratory has recently done by studying seismic waves which travel through the large, geothermally active area at the southern end of the Salton Sea in California's Imperial County near the Mexican border. There the San Andreas Fault has its southern terminus and the Earth's crust is starting to split open under the influence of the spreading ridge further south in the Gulf of California. As a result hot gases and steam escape from the Earth, making the area one of the largest geothermal reservoirs in the world. At a depth of about a mile, ground water temperatures can reach more than 550 degrees Fahrenheit. Hence, ten power stations currently convert the steam generated by the geothermal heat in this area into electricity.

In order to monitor seismic activity at the southern end of the Salton Sea more than half a dozen seismic sensors were deployed in shallow boreholes almost a decade ago. Berkeley researchers Taka'aki Taira, Avinash Nayak (now at U. Wisconsin), Michael Manga, and their colleagues analyzed almost six years of recordings from this network of sensors. They very precisely measured the speed with which seismic waves travel through the geothermal field from one of the sensors to another. In general, seismic waves propagate through the Earth at the very fast pace of about a few miles a second. This is approximately a thousand times faster than the speed of a car on an empty freeway. The method used by the researchers was so sensitive that they could detect changes of the seismic wave speed of less than one percent.

Sometimes the bubbling mud at the Salton Sea piles up to conically shaped heaps called mud volcanoes. One of the geothermal power plants can be seen in the background. Photo: Michael Manga

However minute they are, these variations in the speed of seismic waves are caused by changes in the physical conditions of the ground in the geothermal field. For example, when water is injected from the surface into the hot layers in order to heat it and convert it into steam, the mechanical stress in the ground changes slightly, leading to changes in the speed of seismic waves. Actually, even seismic waves from strong distant earthquakes can alter the stress field in the geothermal area. The method, which the Berkeley group recently published in the journal "Science Advances," is a powerful new tool to monitor the physical conditions under ground. (hra148)