Can We Outsmart a Disaster?

This blog has never been about fear mongering. We have always tried to describe seismic hazards and their associated risks properly, without drifting into horror scenarios about devastating earthquakes. But what you will read here in the next few minutes, will sound like the farfetched plot of a bad Hollywood disaster movie. The only problem is, that it isn't. The "Haywired Scenario" to be published here at UC Berkeley tomorrow describes realistically what would happen in the San Francisco Bay Area with its 7 million inhabitants, if a strong earthquake were to strike along the Hayward Fault. This scenario, the result of several years of work by dozens of experts, are staggering, eye opening, and - yes – frightening.

In the scenario it is assumed that an earthquake with a magnitude of 7 strikes in the afternoon of a typical spring workday roughly at the center of the Hayward Fault with its focus 5 miles below the City of Oakland. Using a sophisticated computer program, seismologists from the United States Geological Survey calculated the extent of the earthquake rupture and the strength of the seismic waves. 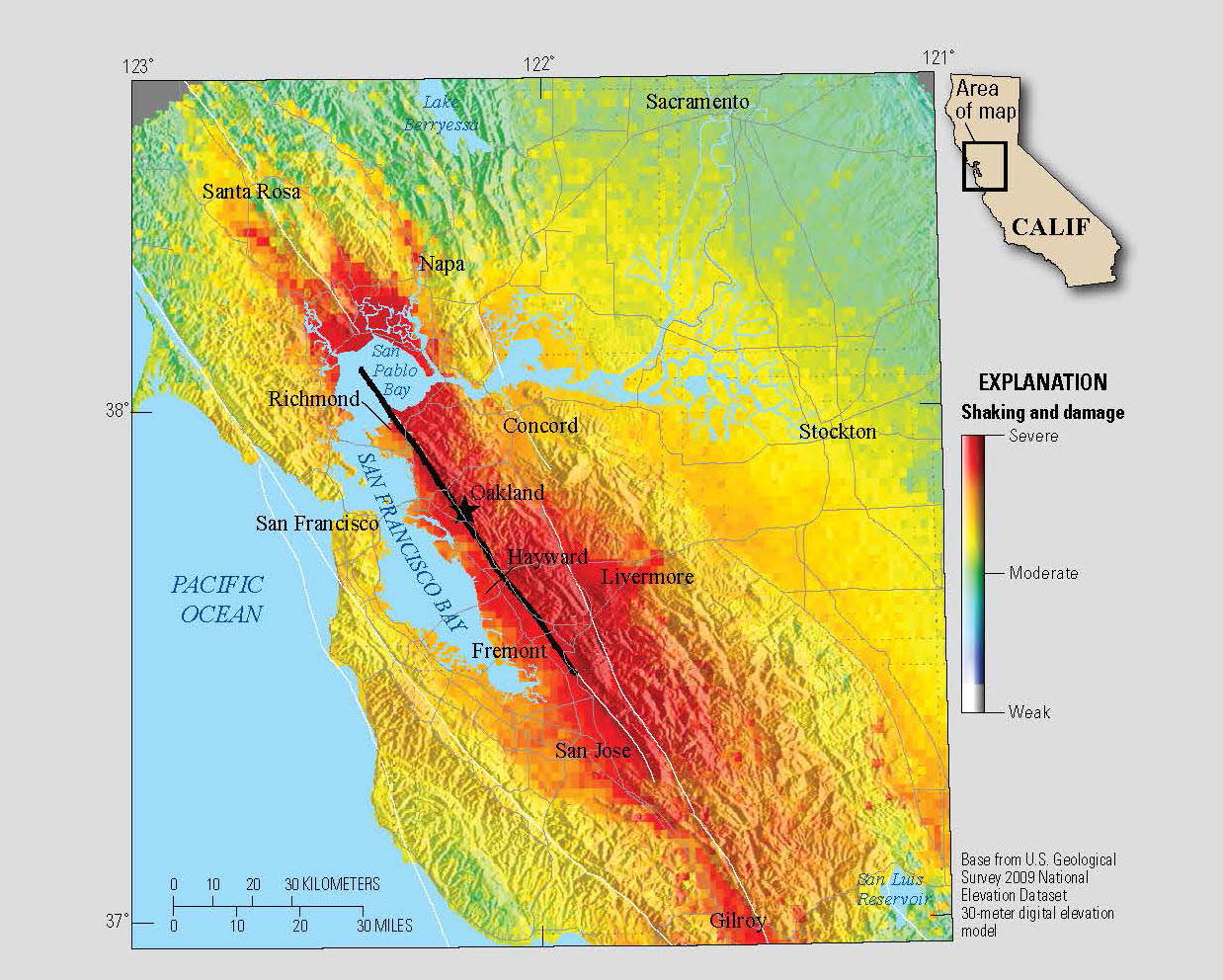 This is a map of the expected shaking of a hypothetical magnitude 7 earthquake on the Hayward Fault under Oakland. The redder the colors, the more severe shaking can be expected. Projections by the Haywired Scenario estimate that more than 410,000 people would be displaced from damaged homes by such a quake. (Source Haywired, USGS)

According to these calculations, the earthquake rupture spreads in less than a minute over a total length of about 52 miles to both ends of the Hayward Fault. It results in an offset of the two flanks of the fault by up to 7 feet. At the same time the entire Bay Area is strongly shaken by the seismic waves. The highest intensities are experienced in the communities which line the fault, from San Pablo in the north to San Jose in the South. Even Gilroy, Livermore and the cities north of San Pablo Bay have to endure severe shaking. In the flat areas near the Bay, the shaking will cause liquefaction, particularly in Alameda, at the eastern end of the Bay Bridge and around the Oakland Airport. Hundreds of landslides are expected in the East Bay Hills of Alameda and Santa Clara Counties.

Using these simulated ground shaking parameters as input, experts calculated the effects on the 2 million buildings, the infrastructure and people in the greater Bay Area. The results are horrifying: The shaking will be so severe that an estimated 8000 buildings will completely collapse and another 100,000 will be "red tagged", meaning they are unsafe to be occupied. The shaking will destroy gas lines resulting in more than 400 fires. Because many water mains will also have been rendered useless by the rupture, many of the fires cannot be fought and hence will consume the equivalent of 52,000 single family homes.

The death toll from the collapse of buildings and structures it expected to exceed 800 people, 2500 more will need to be rescued from the rubble. Further 18,000 people could be severely injured. The number of casualties will rise as additional damage is caused by aftershocks, the largest of which this scenario places just north of San Jose with a magnitude of 6.4. In addition, the combined damage from ground shaking and the subsequent fires could displace about 410,000 people from a total of 152,000 households, leading to a refugee crisis on a scale rarely seen in this country.

Suffering will continue long after the shaking has stopped and the fires are extinguished. It is expected that the water supply systems in the East Bay counties will be so severely damaged, that thousands of households will be without tap water for months after the earthquake. Repairs to freeways, bridges and railroads can also take the better part of a year or more.

Why does the Haywired Coalition, which consists of dozens of members from government organizations and universities to private businesses publish this scenario, which is based on the best scientific and engineering knowledge currently available? Yes, there is certainly an intention to shake-up every resident of the Bay Area – however, this is not to frighten or scare. Instead the information provided shall be an impetus for each of us to plan and prepare for the inevitable – in order to "outsmart disaster" as the coalition puts it. After all, the question is not if, but only when a strong earthquake will hit the Hayward Fault and the larger Bay Area.

The complete report about the Haywired Scenario can be found at http://outsmartdisaster.com/ and also here. (hra 152)