Does the East Bay Swarm Again?

In this blog, we have often reported about unique earthquake swarms, which happen in the San Ramon Valley in the eastern San Francisco Bay Area west of Mt. Diablo. In fact, the very first entry into this blog almost ten years ago was about a magnitude 4 temblor under Alamo and its relationship to these earthquake swarms. On Sunday and early today many residents of this area felt the Earth rumble again, when almost twenty quakes with a maximum magnitude of 3.3 rattled the ground under the town of Danville. 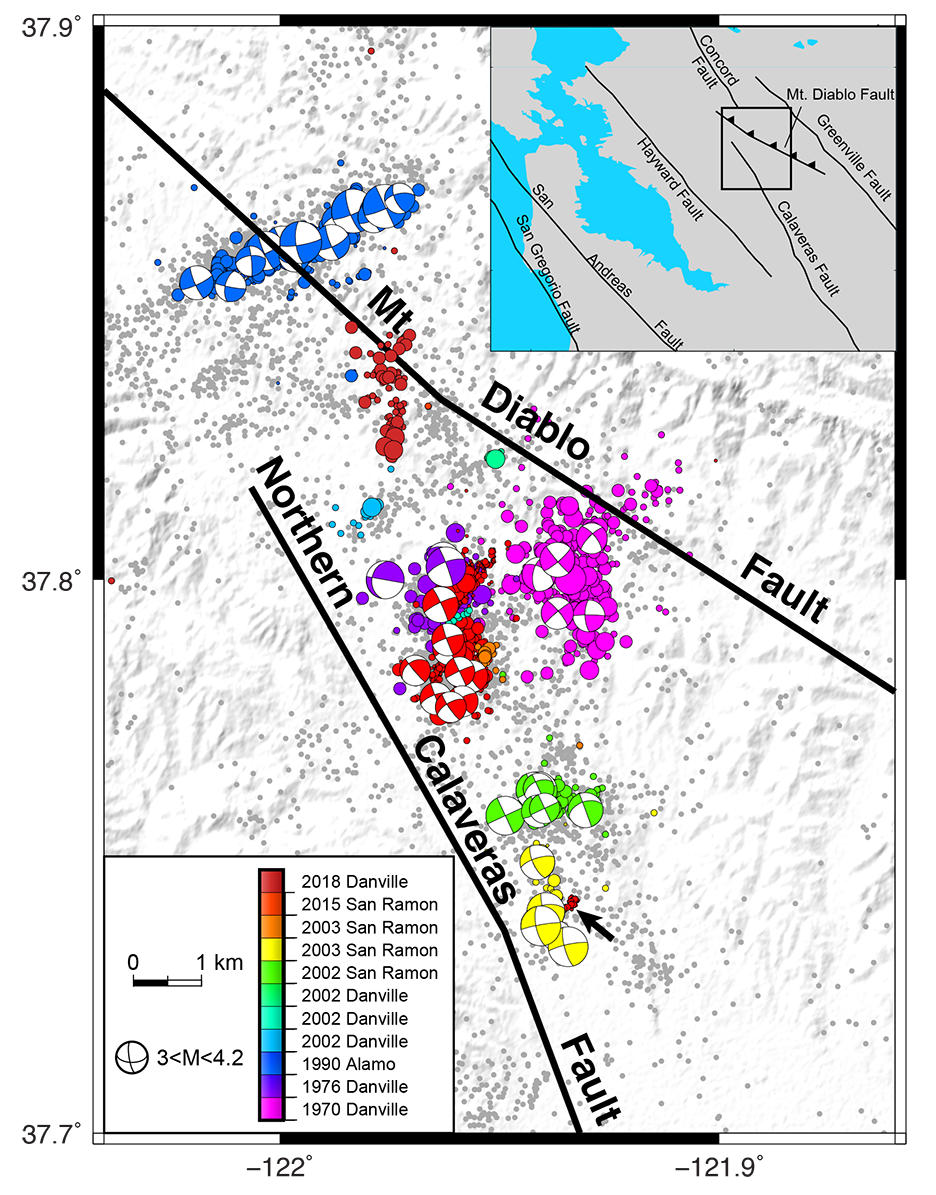 Several thousand smaller earthquakes occurred in the San Ramon Valley over the last five decades. Many of them where concentrated in swarms. The color of each "cloud" of dots on this map shows one of these swarms. The major series of events are the swarms in Alamo of 1990 (blue) and the sequences in San Ramon in 2002 and 2003 (green and yellow). However, most of the swarms occurred under Danville in the center of the map, including the most recent mini-swarms. (Map by Lian Xue, BSL)

Earthquake swarms are different from regular sequences of seismic events. In a typical quake setting, a mainshock is followed by dozens or even hundreds of aftershocks. Sometimes, there may be some foreshocks but all of the quakes before and after the main event are smaller than mainshock itself. In contrast, one of the characteristics of swarm earthquakes is that they are not dominated by one big quake. Instead an earthquake swarm consists of hundreds of temblors of similar sizes. Another difference is that aftershock sequences tend to die down over time. Overall, the aftershocks become smaller in size as time goes on, and they happen less and less frequently. In swarm events, however, the quakes' magnitudes do not decay over time and the swarms can stop as suddenly as they began, with no obvious reduction in the rate of earthquake occurrence toward the end.

The area along the I-680 corridor west of Mt. Diablo is unique, because it is the only region in Northern California in which such earthquake swarms occur, outside of volcanic areas like the Geysers and Long Valley Caldera. At least ten major swarms in this area have been monitored in detail over the last five decades (see Figure 1). The geologic structure in the San Ramon Valley is very complex. The main fault is the Calaveras Fault, which splits from the San Andreas Fault near Pinnacles National Monument 100 miles further south. Near San Ramon and Danville, it ends diffusely. In contrast to the other main Bay Area faults, the northern end of the Calaveras displays very little aseismic creep and practically no earthquakes occur on it. The last big quake on this fault segment is thought to have happened more than 300 years ago. On the east side, Mt. Diablo towers over the San Ramon Valley. This dominant peak in the East Bay is still being pushed upwards along the Mt. Diablo Thrust Fault. The third player in this complex tectonic ballet is the Concord-Green Valley Fault. Its southern terminus reaches into the San Ramon Valley from the northeast. Taken all together this unique geology of the area generates earthquake swarms. Unlike most of the other temblors in northern California, they are not neatly aligned along the main fault lines. 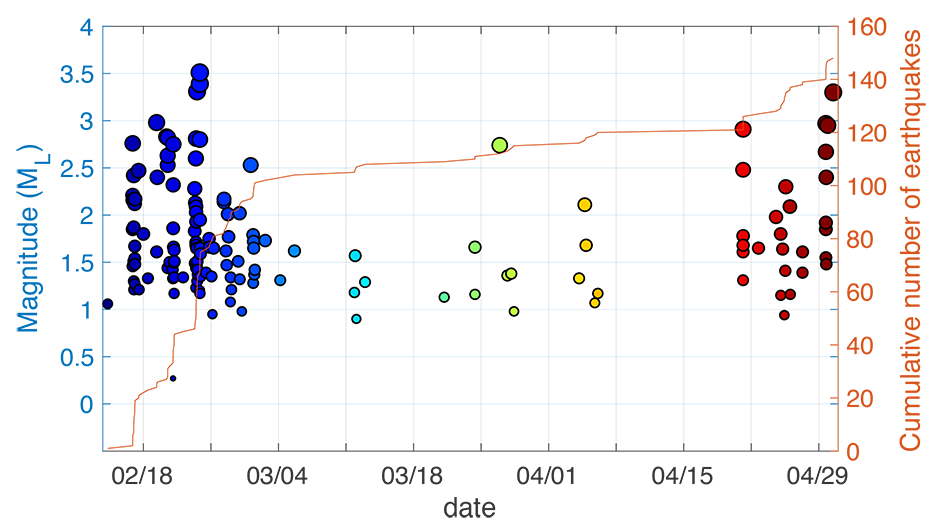 This graph shows the seismic activity under Danville over the last 10 weeks, with the time line running from left to right. The first quakes occurred shortly after February 15 (blue dots) with the strongest one reaching a magnitude of 3.5 (left scale). This mini-swarm seemed to fizzle out at the beginning of March with only few quakes here and there (green and yellow dots). Then last week the number of quakes picked up again, culminating so far in a magnitude 3.3 event on Sunday (red dots). Overall more than 150 quakes were recorded under Danville as indicated by the red line (scale on right). (Graphic courtesy of Lian Xue, BSL)

In a new paper to be published in print tomorrow Berkeley Seismological Laboratory researcher Lian Xue and her colleagues have shed some light into the causes of these East Bay earthquake swarms. In their study they found that the hypocenters of the earthquakes in the swarms are located along planes perpendicular to the northwest-southeast trending fault lines typical for Northern California. Hence the swarms are thought to be the result of the transfer of the tectonic load from the Northern Calaveras Fault to the Concord-Green Valley and Mt. Diablo fault zones. In the parlance of Earth scientists they represent a "step-over" between the two fault zones. Lian Xue and her colleagues also noted that the earthquakes in a swarm tend to migrate along the various planes, possibly in response to fluid movement deep underground.

It is not yet clear, whether the sequence of small temblors in the last few days will develop into an outright swarm. In late February a similar cluster of small quakes occurred in the same location under Danville. Initially, this mini-swarm seemed to fizzle out in less than a week. But occasionally a few further microearthquakes did occur there and the ground under Danville became much more active again over the weekend (see Figure 2). Nobody can predict how this is going to play out. But if the past is any indication, these quakes could continue for months and fray the nerves of the people living there. The last one of the long lasting swarms with nearly continuous seismic activity took place during five weeks in the fall of 2015, when San Ramon and neighboring towns were shaken by more than 4000 seismic events. (hra153)