Earthquakes in California, so it seems, occur mostly in the coastal regions of the Golden State. Indeed, the San Andreas Fault and its sister fault lines are nowhere more than a few dozen miles away from the Pacific shores, except for their southernmost reaches around the Salton Sea in the Imperial Valley. And the many temblors north of Cape Mendocino in far northern California also occur near the coast. There the San Andreas Fault has ended and the plate boundary becomes a subduction zone, where the Gorda plate dives beneath the North American plate into Earth's mantle. So it may come as a surprise, that on this day in 1872 California was shaken very hard by a strong quake with an epicenter along the eastern flank of the Sierra Nevada. The magnitude of this "Owens Valley Earthquake" was at least comparable, if not higher than that of the Great San Francisco Earthquake 34 years later. Although no seismographs recorded the 1872 quake, modern calculations assign it a magnitude of 7.8 to 7.9. Taking the uncertainties of such estimates into account, the strength of this quake may as well have exceed an "8", which would make it the strongest temblor in California in historical times. 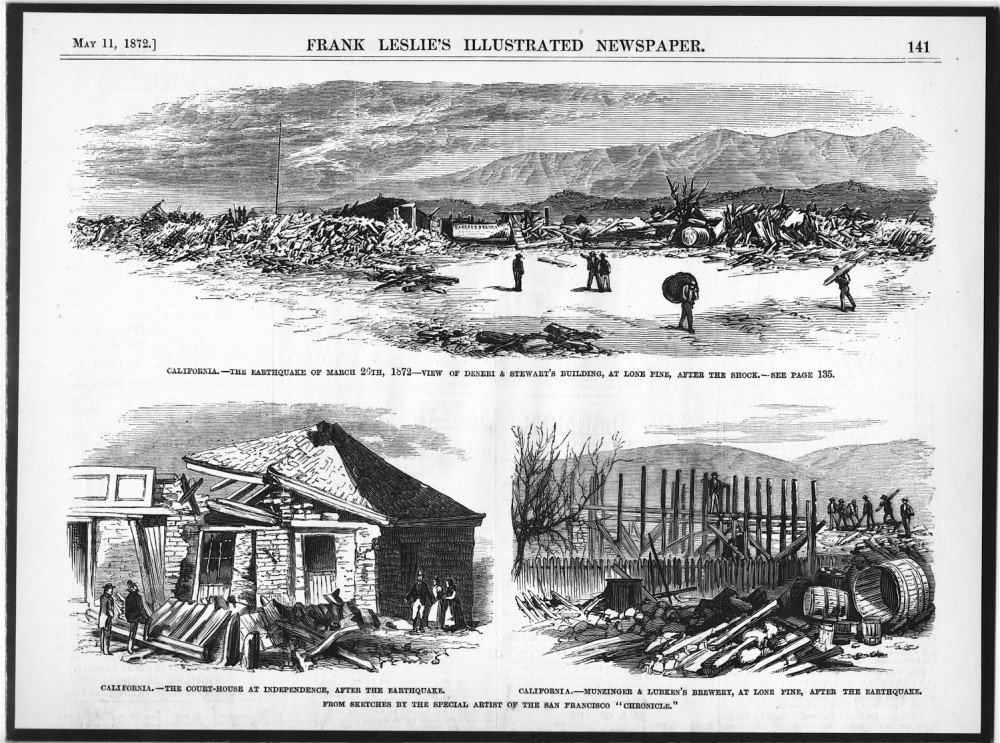 Figure 1: Many buildings in the mining towns of Lone Pine and Indepence were destroyed by the shaking of the Owens Valley Earthquake in 1872, as shown here in a reproduction of "Frank Leslie's Illustrated Newspaper" dated May 11, 1872.

The quake happened on March 26, 1872 at 2:30 in the morning. Its epicenter was in view of Mt. Whitney, California's highest peak, near the mining camp of Lone Pine. Except for a few other mining settlements, the Owens Valley was only sparsely populated at this time. Nevertheless 27 inhabitants of Lone Pine were killed – more than ten percent of its population. Of the 59 houses comprising that settlement, 52 were destroyed (see Figure 1). The quake also left a profound mark on the landscape, generating a fault scarp more than two meters tall, while the ground also shifted about five meters to the right. That scarp was the result of the shift of tectonic units during the rupture and could be followed – albeit not as massive as in Lone Pine – for more than 40 miles to the north and to the south of the epicenter. In fact, traces of this huge displacement can still be seen today along the well-marked earthquake drive west of the current town of Lone Pine. The quake was felt as far away as Sacramento and Los Angeles.

Figure 2: This map shows the slip distribution caused by the 1872 quake in Owens Valley. Red colors show a horizontal slip of the ground of up to 18 feet. (Adapted from Haddon et al., https://agupubs.onlinelibrary.wiley.com/doi/full/10.1002/2015GC006033)

John Muir, the famous Scottish born naturalist, was awakened by the shaking in his remote cabin in Yosemite Valley. He ran outside and in his typical poetic exuberance yelled "A noble Earthquake!" As a keen observer of nature he described the shaking "For a minute or two the shocks became more and more violent--flashing horizontal thrusts mixed with a few twists and battering, explosive, upheaving jolts". Nature fell silent for a few minutes after the shaking had stopped. But then, Muir observed, "suddenly, out of the strange silence and strange motion there came a tremendous roar. The Eagle Rock on the south wall, about a half a mile up Yosemite Valley, gave way and I saw it falling in thousands of the great boulders". The violent seismic shaking had set off one of the intensive rock falls which occasionally happen in the famous granite valley. How can the Earth shake so dramatically more than 200 miles away from the nearest plate boundary further in the west? There are two factors to consider. The Sierra Nevada mountains have been uplifting for more than a million years. The strongest upwards push is on its eastern flank, which leads to an asymmetrically tilted mountain range. While it takes hours to drive from the west until one reaches the passes along the crest of the Sierra, the climb from the Owens Valley in the east is much shorter, but considerably steeper. This uplift is still going on and – as in 1872 – can occasionally lead to strong earthquakes.

Another factor is that the Owens Valley is the westernmost extent of a geologic province called "Basin and Range". It covers much of Nevada and some parts of Utah and is characterized by dozens of parallel, north-south trending ranges interspersed by long valleys extending along the same strike – the basins. This topographic yin and yang is the result of a stretching of the Earth's crust in an east-west direction. As the crust becomes thinner, whole blocks of rocks begin to subside, creating the basins. This subsidence happens along faults at the foot of the mountain ranges, where the basin side slips down relative to the mountain side. In tectonics, this process is called normal faulting – a movement observed in the Owens Valley quake.

As both the uplift of the Sierras and the crustal stretching in the Basin and Range are still going on, the very big quake 147 years ago today was no singularity. There is still significant seismicity in the Owens Valley, although no destructive earthquakes have been recorded recently.
(hra164)