Very often it is not a single instant but a chain of events which turn a rare natural occurrence into a devastating natural disaster. One of the prime examples of how much havoc a sequence of events can cause took place sixty years ago today in the area around Hebgen Lake near Yellowstone National Park in southwestern Montana. 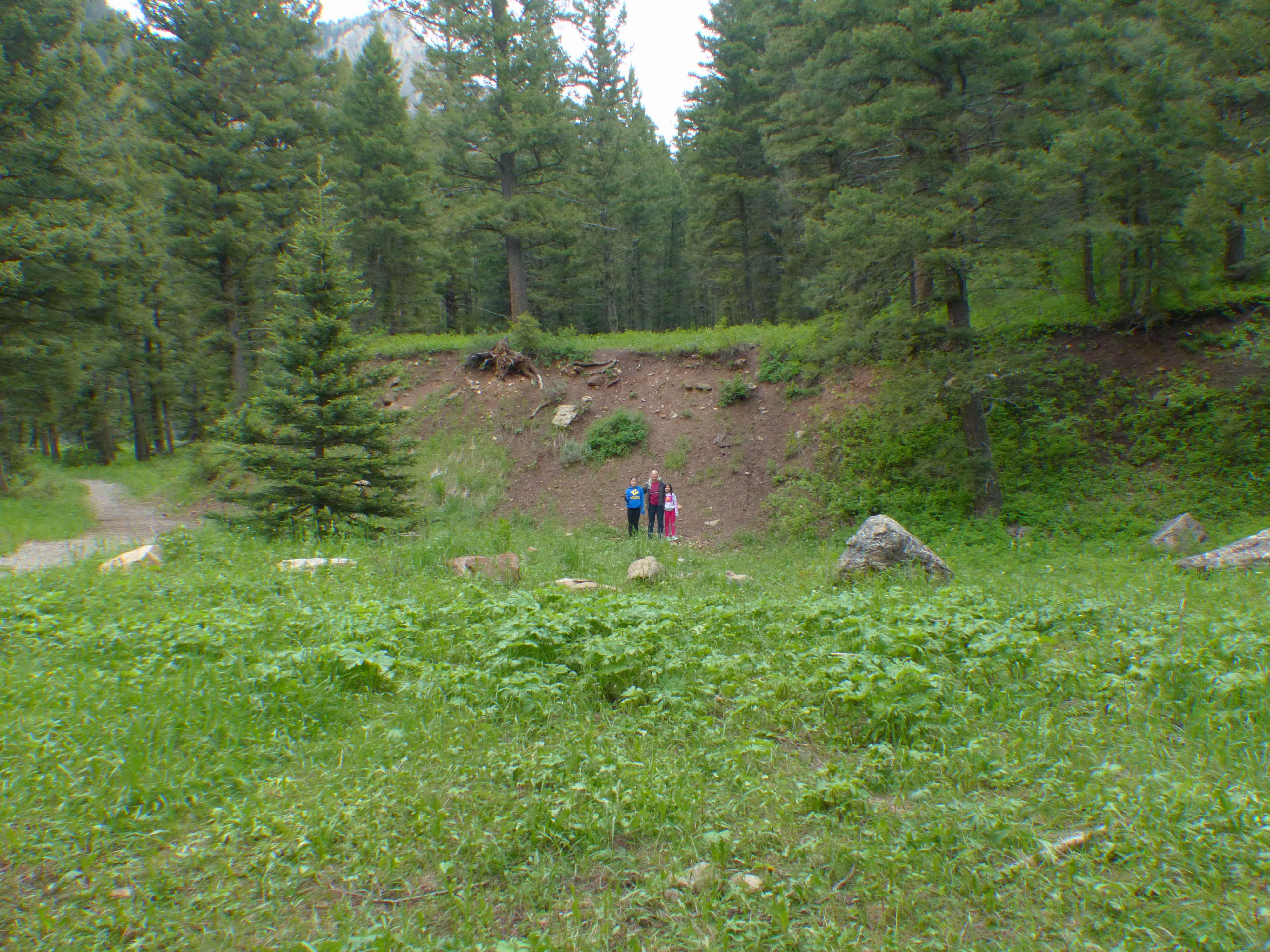 Even sixty years after the Hebgen Lake earthquake, the fault scarp is clealy visible in the forest near Cabin Creek camp. The ground in the foreground, where the visitors stand, dropped by almost 20 feet in this normal fault earthquake
Photo: Horst Rademacher

Hebgen Lake is an idyllic body of water, famous for its trout fishing. The lake was created in 1914 when the Montana Power Company impounded the Madison River with the concrete-core Hebgen Dam. Several geologic fault lines parallel the north shore of the lake. They were, however, deemed to be inactive and to pose no danger to the reservoir. Every summer, hundreds of sportfishermen flock to the lake, stay overnight in the dozens of campgrounds or the many cabins and resorts which dot the lake's shores. Mid-August is usually the height of the tourist season in this area, so many campgrounds were full on the fateful night of August 17, 1959. That night a chain of natural events turned this peaceful vacation spot into a devasting death trap in which almost 30 people perished.

The havoc began shortly before midnight when visitors and locals alike were rudely awakened by a magnitude 7.5 earthquake. It's severe ground shaking was the first blow, which struck the area. The quake's epicenter was located along the north shore of Hebgen Lake almost directly beneath Cabin Creek campground. This temblor turned out to be a normal fault earthquake in which the lake-facing flank of the fault, which had been deemed “dormant”, dropped by almost 20 feet. Boulders the size of refrigerators shaken loose by the quake tumbled onto tents and trailers on the campground, immediately killing several visitors. The sudden drop of ground along the fault also caused the state highway on the north shore of the reservoir to collapse into the lake, blocking the only escape route to the east. 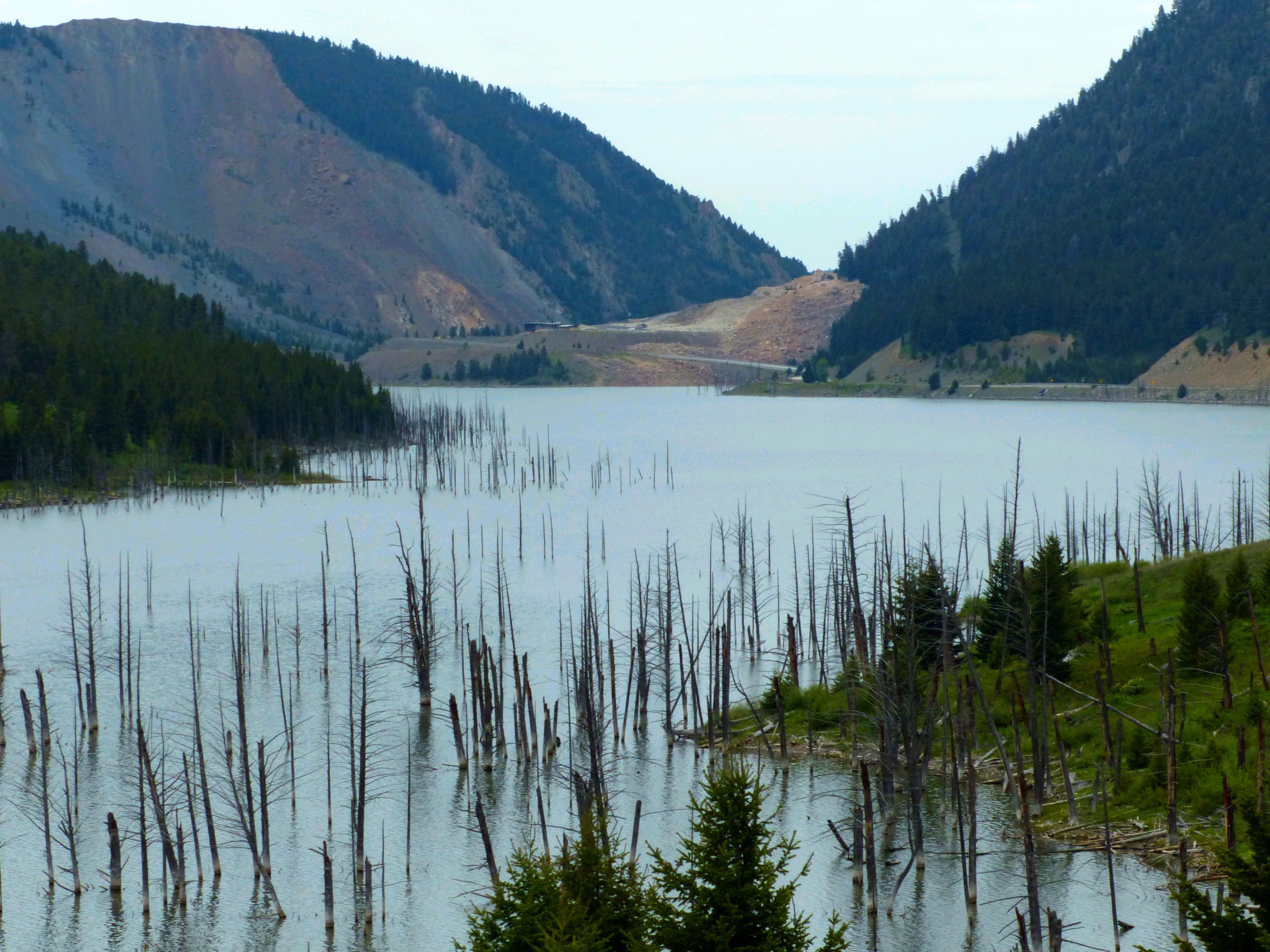 Like ghosts these leafless trees stick out of Earthquake Lake sixty years after the lake was created by a giant landslide. The scar of the slide is still visible on the mountain flank in the rear.
Photo: Horst Rademacher

The sudden downward shift of the ground also had a dangerous side effect – the second punch to hit Hebgen Lake that night. It caused the water in the 12000 acre lake to slosh back and forth for almost half a day. The run-up of lake water on the shores drowned people who were sleeping in nearby cabins and huts. This standing water wave is known by its French name as a seiche and has been observed in many lakes and reservoirs. At least four times the sloshing of the lake caused water to overtop Hebgen Dam, resulting in cracks and severe erosion. An inspection during the next few days showed that the dam was on the verge of collapse.

However, less than six miles downstream from the dam, another side effect of the earthquake caused a much more severe and immediate problem. The shaking of the seismic waves mobilized the entire flank of a mountain on the south side of Madison River. When it collapsed, 73 million metric tons of rocks and debris slid down the slope in one of the most massive landslides ever observed in the United States. At least 19 people were buried alive in this giant slide. The slide – the third blow in the chain of events that fateful night - also wiped out the state highway to the west, effectively trapping the hundreds of campers and locals in the area of devastation.

At the same time, the slide completely blocked the flow of the Madison River. The water immediately began to accumulate behind the natural dam piled up by tons of slide debris. Although the Army Corps of Engineers began to breach this dam a few weeks after the catastrophe, the outflow was kept to a minimum so as not to wreak havoc by producing a sudden flood downstream. Even today, sixty years after the disaster struck, Earthquake Lake fills the valley, with leafless ghost trees sticking out of its waters. These trees died after being inundated by the impounding of the Madison River.

Today, from the Earthquake Lake Visitor Center built by the US Forest Service on the remnants of the dramatic landslide, visitors can view the havoc created by the chain of events that began with the earthquake on August 17, 1959, and learn the story of how it changed the area forever. (hra168)