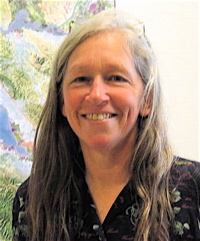 Dr. Peggy Hellweg studied physics at the University of California San Diego. She spent her junior year abroad at the University of Goettingen, Germany, where she returned after she received her BA. After earning a masters in physics at Goettingen, she turned to seismology and worked at the seismological laboratory of Germany's Federal Institute of Earth Sciences and Resources. In the mid-1980s, she returned to the United States, where she worked on strong-motion earthquake projects at the United States Geological Survey. She earned her doctorate in 2000 at the University of Stuttgart, Germany, on seismicity associated with volcanoes. Since 2001 Dr. Hellweg is at the Berkeley Seismological Laboratory, where she is Operations Manager for the BSL's network of high quality seismometer/accelerometer stations. She is Project Manager for the Earthquake Early Warning activities at the BSL and spearheads outreach to users of the EEW system, CISN ShakeAlert, in California.