Berkeley Seismo Lab researchers Douglas Dreger, Taka'aki Taira, and Robert Nadeau, and colleagues from Yokohama City University in Japan have a new method for modeling the way slip is distributed along the San Andreas Fault near Parkfield, CA. The new method differs from the standard approach in that it uses very small repeating earthquakes to identify common features and remove uncertainties.The resulting model supports earlier findings, suggesting portions of the fault are locked.

As models improve and become more precise, they can reveal different fault features, which aids seismologists in developing their understanding of the mechanics of earthquake ruptures and how the fault behaves over time in response to stress increases and decreases. This is important, as it is these stress changes that inform seismologists about the seismic hazard associated with different parts of the San Andreas Fault. 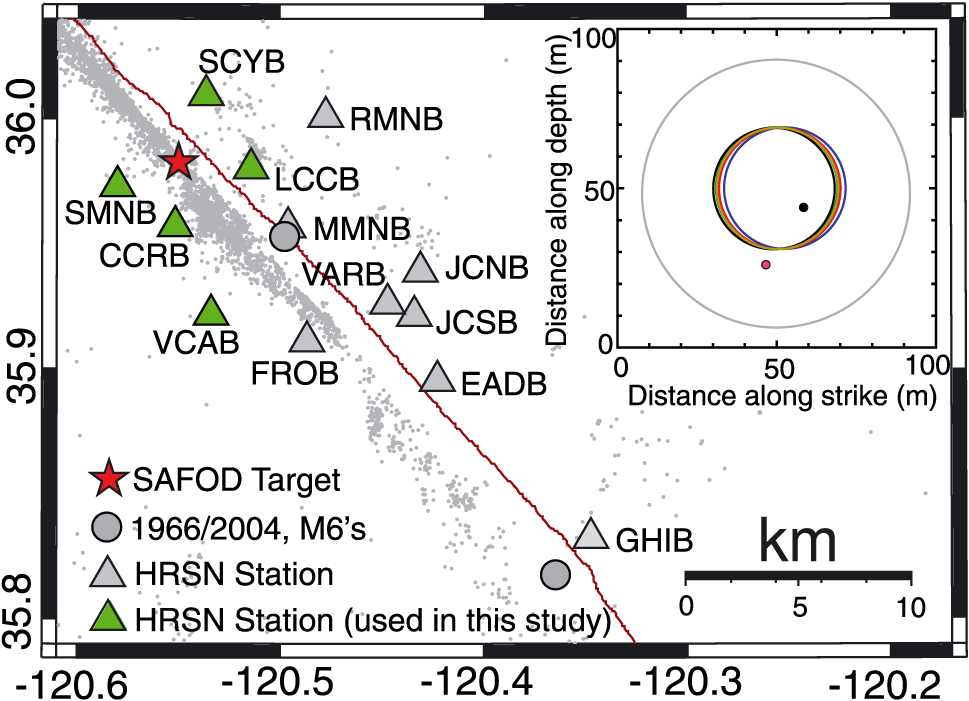 Modeling earthquakes is a difficult task because the data seismologists record contain much more information than simply the slip on the fault. In some cases, seismologists can take a seismic record (e.g., from a seismogram) and try to break down what caused the wiggles to appear the way they do. This is tricky, as the record not only records the seismic source, but it also records the distortions caused by the surrounding geology as the energy moves from the hypocenter to the seismic station where the signal is recorded, as well as the instrument response for the device that does the recording.

However, scientists have realized that extracting certain features of an earthquake using such a simplified one-dimensional model can skew and give misleading results. In this new approach, BSL and Yokohama City seismologists collected information from small repeating earthquakes to model the earthquake source.

Repeating earthquakes are quakes with a similar shape that occur again and again on the same patch of fault. Since all the earthquakes can be thought to be simple repeats of each other, changes in the recorded seismograms become much easier to define.

The results of their investigation were promising and supported earlier findings; that near Parkfield there exists portions of the fault that are locked. This modeling method also shed some light about the drop in stress and slip that occurred after the 2004 magnitude 6.0 event in Parkfield. The overall performance of this method allowed seismologists to make interpretations on the nuances between different seismic records; something that could not be done before.