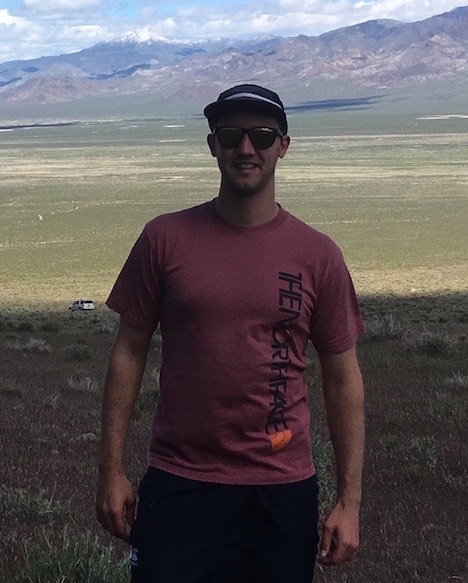 Chris Milliner is a postdoctoral scholar working with Roland Burgmann on problems related to active tectonics and fault zone deformation. His research focuses on using geodetic techniques to better understand how faults release strain throughout the earthquake cycle from the surface to upper mantle depths.

Left GPS motions shifted due to postseismic afterslip motion following the 2016 Mw 7.0 Kumamoto, Japan earthquake. Red arrows show horizontal directions of GPS station and colored dots vertical motion. Right Fault model of afterslip, along the fault plane derived from GPS data (left) occurring in the 3 months following mainshock, where mainshock slip is contoured in white lines, illustrating postseismic slip occurring in areas of high stress, but not in areas to the north-east where the Aso Volcano is located.

Prior to his arrival at UC Berkeley in September, Milliner completed his doctoral thesis in Geology at USC with Prof. James Dolan. His doctoral research involved using satellite images taken before and after earthquakes to quantify the magnitude and width of fault rupture at the surface. This research delivered a better method to resolve complex motion close to faults, previously difficult to accomplish with standard geodetic techniques, and provided vital data needed for better mitigating for the effects of zones of distributed ground rupture that pose a hazard to the built environment. At UC Berkeley Milliner hopes to apply this optical imaging method in combination with others (e.g., GPS and InSAR), in order to improve scientist’s understanding of fault slip behavior at large, crustal depths.

Moving forward Milliner is interested in learning how new and emerging geodetic datasets (e.g. lidar differencing) can inform us about tectonic processes at depth. Come August Milliner will be moving to JPL to take a second post-doctoral position, where he hopes to continue the collaborations he has forged with members of the Berkeley Seismological Laboratory.