About Moment Tensors and "Beach Balls"

The Berkeley Seismological Laboratory has been routinely estimating the seismic moment tensors of earthquakes in northern California since 1992. A seismic moment tensor is a mathematical description of the forces that drive earthquake rupture, and they can be interpreted in terms of the nature of the faulting. Geologists measure the orientation in terms of the strike (angle that a fault plane makes with the North direction), the dip (angle from the horizontal describing how a fault slices into the earth) and the slip (direction that two blocks move with respect to each other). The following figure illustrates the three fundamental fault types, namely normal, strike-slip and reverse faults. Normal and reverse faults are dip-slip faults where one block moves vertically with respect to the other. Normal faults have the hanging block moving downward whereas the reverse faults have the hanging block thrust upward. Strike-slip faults have the two blocks sliding horizontally past one another. 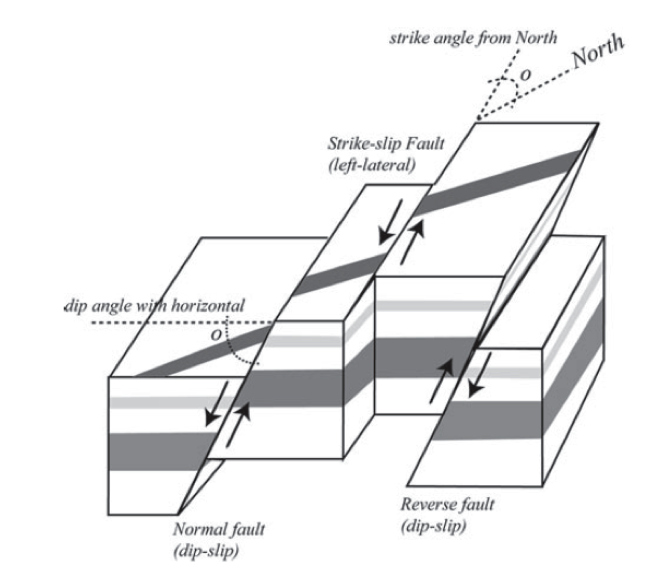 When geologists and seismologists try to examine the orientation of faults in map view to either assess the relationship between a given earthquake and nearby fault, or to investigate the nature of the aftershocks are generated, they use a diagram to illustrate the three-dimensional orientation of a fault in the two-dimensions of a map. These diagrams are called focal mechanism diagrams, or sometimes “beach-ball” diagrams. These circular diagrams shown in the following figure are able to illustrate the strike of a plane with respect to North and its dip, where the straighter the line the more vertical the dip. A curved line close to the edge of the circular diagram illustrates a near horizontal dip. This figure, prepared by the US Geological Survey is a sort of “Rosetta Stone” of focal mechanisms relating the geologic block motions to the focal mechanism diagrams. These diagrams are obtained from the analysis of seismic waveform data, the most basic type being whether the P-wave first motion is up or down on the vertical instrument. The azimuths that it is observed to be up are shaded, whereas the azimuths that it is down are left unshaded. This is what gives the alternating pattern for the strike-slip mechanisms (that looks like a ‘BMW’ symbol). 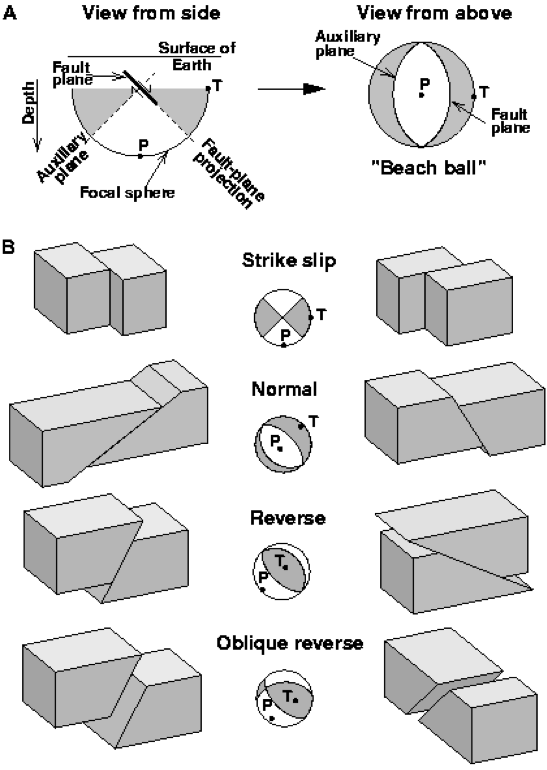 Although there are more details about how focal mechanism (moment tensors) are obtained, their interpretation, and why mathematically there are two planes (a primary and auxiliary) this description enables their use to identify the nature of a given earthquake rupture and what fault may have been responsible. For example the figure below shows the moment tensors that the BSL computed in 2014. The event labeled as ‘A’ is strike-slip, and one of the two possible planes is aligned with the San Andreas Fault, a great strike-slip fault. Nearby, the event labeled ‘B’ is reverse. While this map does not show any faulting, and either the SW or NE dipping faults is possible, the event does occur in a region where geologists have noted folding and the formation of an anticline. The reverse mechanism is consistent with reverse faulting a depth that can lead to the formation of an anticline. The events labeled ‘C’ in northern California are of the normal type, indicating that there is tensile faulting occurring in the region. As you examine this figure you will note that there is a great variety of events with many classified either as normal, reverse or strike-slip (but with different orientations), as well as numerous events that do not fit those three geometries. The events that deviate from the idealized faulting types are mixtures, or as seismologists say “oblique events”. Oblique events can be mixtures of both strike-slip and dip-slip meaning that the fault blocks are moving both horizontally and vertically with respect to each other.

There are many other applications of seismic moment tensors that include the estimation of the earthquake magnitude, the monitoring of (nuclear) explosions, underground mine collapse, volcanic seismicity and even ice quakes occurring in glaciers. 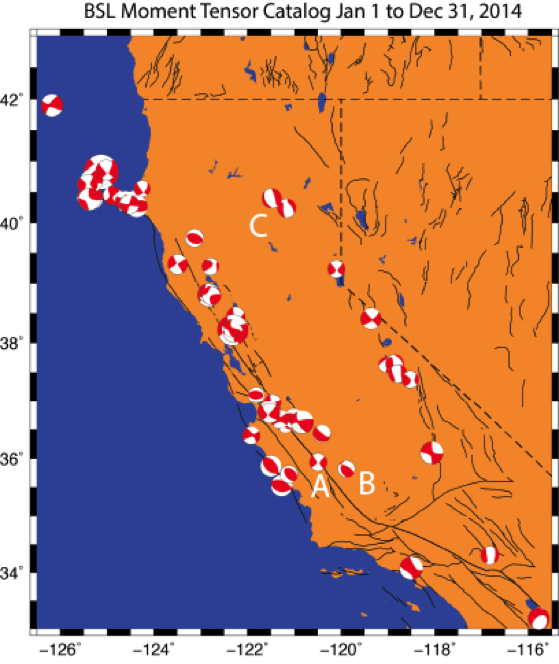 Focal Mechanisms Can Be Mapped

Figure showing moment tensor (focal mechanisms or so-called beach-ball diagrams) for earthquakes in Northern California in 2014. A, B and C label strike-slip, reverse and normal events.

More About Our Moment Tensor Solutions

The Berkeley Seismological Laboratory (BSL) routinely determines moment tensors for events occurring in Central and Northern California, and for notable earthquakes in the western US. Most of the mechanisms, particularly for California events, have been migrated from the old flat file catalog to the database of the Northern California Seismic System.

In the past, the BSL operated two automated moment tensor algorithms. Currently, only the three-component complete waveform inversion is used to attempt a preliminary (automatic) moment tensor solution within 6-9 minutes of an earthquake. Excellent solutions (variance reduction > 80%) are posted automatically to the web. All events with M>3.5, are reviewed by an analyst. If a solution is deemed acceptable, it is submitted to the database, disseminated via email and is posted to the web. 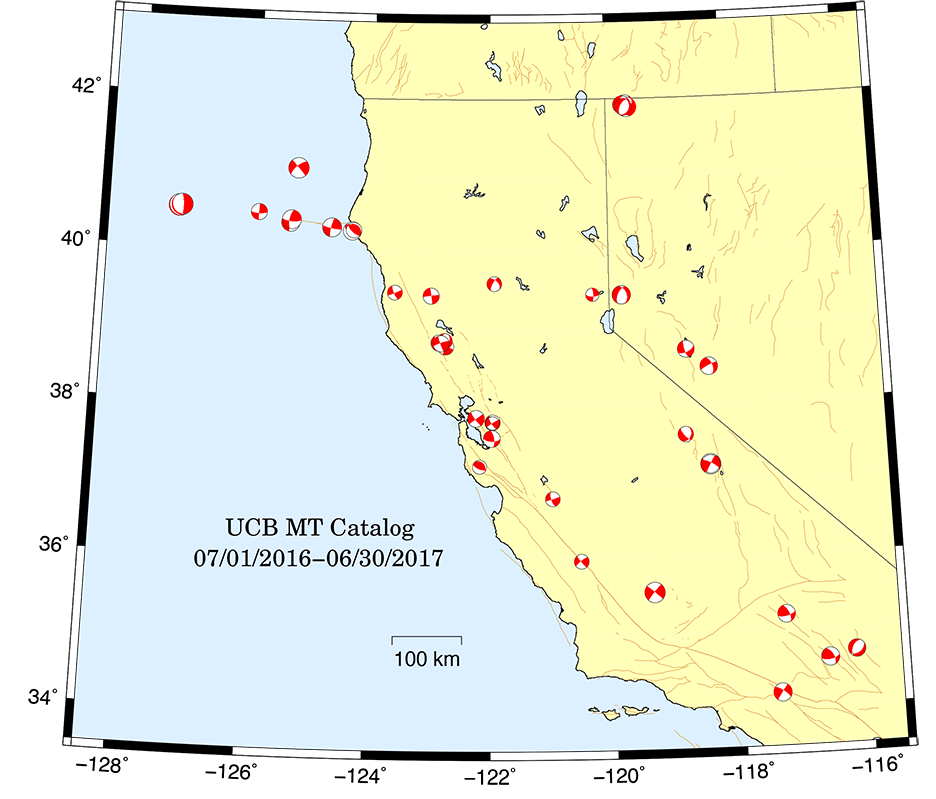