Where the San Andreas Fault Ends

Within just half a minute of each other, two earthquakes shook the northern coastal region of the state. The first temblor, with a magnitude of 3.8, occurred at half past two early Sunday morning, October 26th. It was located off-shore, about 35 miles southwest of Eureka. With a magnitude of 4.9, the second quake was considerably stronger and happened virtually in the same spot (yellow dot on the map) 31 seconds later. The second quake was felt widely along the coast from Fort Bragg in the south almost to Crescent City in the north. The foci of both temblors are located within the "Mendocino Triple Junction," where three tectonic plates and several fault lines meet.

Imagine a busy intersection with a three-way stop sign at rush hour. It takes only a few irresponsible drivers who don't want to wait their turn and traffic jams and accidents are likely to occur. Something very similar is happening every day in the Earth's crust under Cape Mendocino. There upheaval is caused not by impatient drivers but by tectonic plates, which are crashing into each other with unstoppable momentum. This tectonic three-way intersection is called the Mendocino Triple Junction. It is one of the few places in the world where three of the gigantic plates which continuously drift on the Earth's mantle meet. 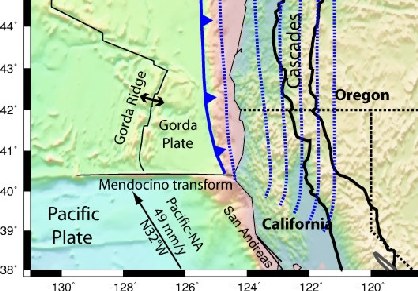 Map of the Mendocino Triple Junction (courtesy of Richard Allen.)

Seismogram showing the two Mendocino Triple Junction area quakes from Sunday, October 26th. The first quake had a magnitude of 3.8, while the second quake, only 31 seconds later, had a magnitude of 4.9. (Click to view larger image.)

Because of the different directions and the various rates of movement of the three plates, the area under Cape Mendocino and a region immediately off-shore has to absorb a lot of mechanical strain. That makes this area one of the most seismically active regions in the state. During the last three decades alone, two strong earthquakes with magnitudes above 7 have occurred there, one in 1980 and the other one in 1994. Every year at least 80 temblors with magnitudes over three are recorded in this region, like the earthquake duo which shook the area early on Sunday morning.

Another tectonically important triple junction is the Afar Triangle, where the Gulf of Aden and the Red Sea meet the northern end of the East African Rift Valley. The Galapagos Islands are also located on a triple junction. Under the islands made famous by Darwin's research, three oceanic plates meet: Pacific, Nazca and Cocos. There is however a major difference between the Galapagos Triple Junction and the three-way intersection under Cape Mendocino. While under Northern California the plates crash into one another, the three plates under Galapaos are moving away from each other. (hra013)