The Biggest Earthquake Drill Ever

Can something that happens in Bombay Beach, that tiny hamlet at one end of the San Andreas Fault (see blog Nov 4, 2008), have an impact on the bustling megacity of Los Angeles more than 150 miles away? A sandstorm, perhaps? Or a flood in the Salton Sea? Well, if you believe more than a dozen seismologists from the Southland, when certain things happen in Bombay Beach, Tinseltown and all its suburbs will be shaken up rather badly. Coordinated by Lucille Jones from the US Geological Survey's Pasadena office, these scientists have looked at the most likely scenario for a really big earthquake in Southern California. They found that the San Andreas Fault could start breaking at its southern end near Bombay Beach. So much tectonic energy is currently stored in this section of the fault that once the rupture starts it might not stop for more than 2 minutes. During that time, the rupture front of the earthquake will travel at the incredible speed of 2 miles per second, emitting seismic waves all along the way. Destructive waves in front of the rupture's head will build up like the bow wave of a boat. 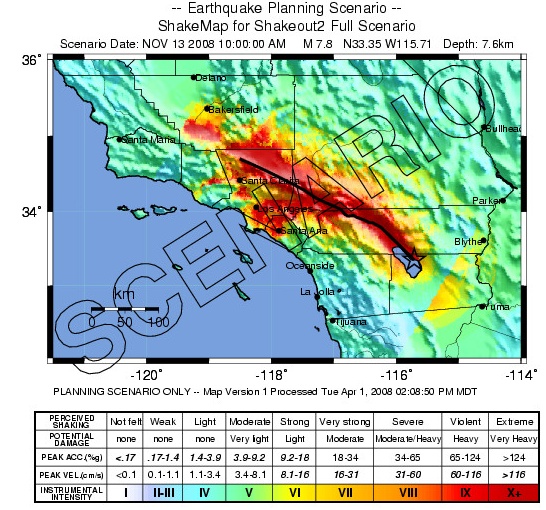 When the rupture finally stops, the ground in the immediate vicinity of a 120 mile long stretch of the San Andreas Fault will have shifted by up to 44 feet. Dozens of freeways, railway lines and utility tunnels will be destroyed where they are offset. All over the Southland, the strong shaking associated with the seismic waves of this magnitude 7.8 earthquake will have done more than just rattle the 22 million people living in the region. Countless houses, overpasses and dams will have be badly damaged or destroyed. Power and water will be out for weeks. Without a doubt, this earthquake will be the deadliest and costliest natural disaster ever to hit the United States.

A scenario like this is more than just an academic exercise. The probability that a temblor of this magnitude will happen in Southern California in the next 30 years is calculated to be almost 100 percent. And what is being done to deal with the inevitable? This Thursday at exactly 10 am PST, hundreds of government agencies, schools, private businesses, hospitals, nursing homes, and many residents will join the biggest earthquake drill this country has ever seen. While thousands of people "duck, cover and hold on" as part of "The Great Southern California ShakeOut", the state's Office of Emergency Services and other public and private entities will practice their response to a scenario based on the M 7.8 earthquake described above. The lessons learned down south will not only apply to Southern California. Although a big earthquake in the Bay Area is currently considered to be less likely than in LA (see blog Oct 10, 2008), our region will - without a doubt - someday be shaken at least as badly. While such an earthquake is inevitable, damage to you and your family is not. Learn about how to protect yourself and your home by following the tips on the ShakeOut website. (hra016)