Of Tunnels and Earthquakes: Part I

This weekend's rain brought delight to skiers and snowboarders. What fell as droplets in the Bay Area metamorphosed into snow flakes in the Sierra Nevada and its foothills. The snow brought smiles to more faces than just the outdoor enthusiasts'. Officials of the various agencies supplying drinking water to the Bay Area rejoiced in the renewal of the snow pack - and thus also of our water supply. Because most of us drink, shower and cook with melted snow.

Earthquakes pose a major risk to that water supply. The pipelines and tunnels carrying clean snow melt from the Sierras to our houses cross major faults in the East Bay. Even a moderate quake on one of those faults can wreak havoc with these lifelines - and experts predict that your faucets may remain dry for weeks after a really big quake. All the local water agencies are therefore engaged in major seismic upgrades of their infrastructure, be it pipelines, tunnels, or water treatment plants. We all bear the costs for these upgrades through surcharges on our water bills, like the $1.18 per month that is added to the blogger's bill.

Take the example of the East Bay Municipal Utilities District (EBMUD), which supplies water to 1.2 million customers in Alameda and Contra Costa Counties. It spent more than 35 million of its surcharge dollars to upgrade the Claremont Tunnel through the Berkeley Hills. Built in 1929, this 3.4 mi long, 9 ft wide tunnel connects the treatment plant in Orinda with EBMUD's pipe network west of the hills. At peak demand, it can carry 175 million gallons of water per day. The tunnel itself is a sturdy piece of engineering. It would continue to serve well, if it were not for the Hayward fault, which it crosses at an almost right angle 850 ft from its western portal. During the 79 years of the tunnel's existence, the creeping of the fault has caused 13 inches of offset of the reinforced tunnel lining (see red arrows in figure). 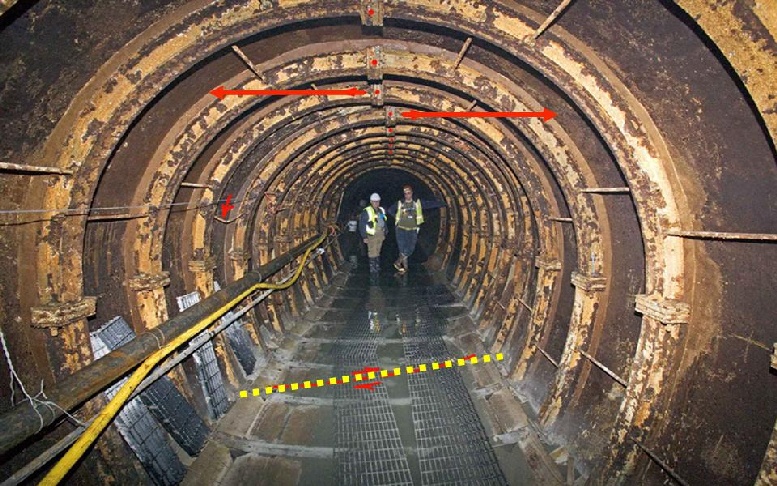 However creepy this movement may make the engineers feel, they are even more worried about a major earthquake along this section of the Hayward Fault. The reason: There is a one in three chance that the fault will break in a quake of magnitude 6.7 or greater during the next 30 years (see blog October 10, 2008). In 1994, experts estimated that a quake-caused disruption of the water supply through the Claremont Tunnel would result in economic losses of about $1.9 billion. Read more about how EBMUD made the tunnel safer in the next blog. (hra023)