Quakes Under the Bird's Head

Earthquakes, of course, do not recognize religious or other holidays. Neither do they take notice of the - from a geophysical perspective - completely arbitrary choice of the date of the beginning of the new year. Nevertheless, during the last two weeks, the world's seismicity was exceptionally low, which allowed the blogger to take a few days off. The relative quiescence, however, ended with a bang over the weekend, when Indonesia was struck by two major earthquakes within less than three hours of each other. According to local news reports, at least four people were killed and dozens injured; several buildings collapsed. 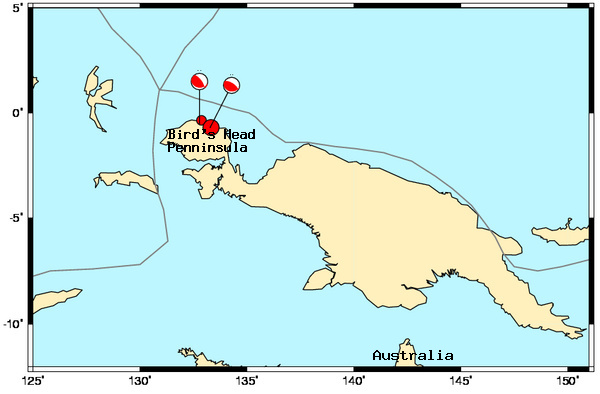 The first quake happened shortly before 5 am on Sunday morning (local time) and had a magnitude of 7.6. It was followed by dozens of aftershocks, the strongest of which occurred nearly three hours after the main shock with a magnitude of 7.4. On the long term average, only about ten earthquakes of such strength happen worldwide every year (September 14, 2008). The latest earthquake sequence originated under Indonesia's eastern province, West Irian Jaya. Geologically this province belongs to the island of New Guinea. The epicenters were located beneath the island's westernmost "Bird's Head Peninsula", which derives its name from its unmistakable shape. The casualties and building collapses were reported from the provincial capital Manokwari, more than 1800 miles east of Indonesia's federal capital Jakarta.

The tectonic situation in this part of the world is complex. Three major lithospheric plates converge in this region and break up into half a dozen microplates, which tend to wiggle under the onslaught of tectonic forces. Under the Bird's Head Peninsula, the Pacific plate is moving southwest with respect to the Australia plate. Compared to its speed in California of about 2 inches per year, the Pacific plate races under New Guinea, moving with a velocity of almost 5 inches per year. According to the USGS, the focal-mechanism of Sunday's earthquakes are "broadly consistent with Pacific plate lithosphere being subducted beneath Australia plate lithosphere." This subduction zone along the northwest coast of New Guinea is characterized by an offshore oceanic trench, the New Guinea trench.

The Tsunami Warning Center in Jakarta (see blog November 14, 2008) issued a tsunami alert immediately after the main shock, but it was revoked within an hour after scientists determined that the quake's epicenter was on land. (hra025)