It sounds utterly trivial, but there is nothing better than being prepared. What is true for everyday life is even more important for surviving in extreme situations. Think about what you would do in case of a car accident, a flooded basement, or a fire ravaging your neighborhood. While many such situations can only be planned for theoretically, there is a lot you can actually do to prepare for an earthquake and its aftermath. And in this Thursday's "Great California Shakeout," you will have a chance to test your skills and evaluate your preparations. 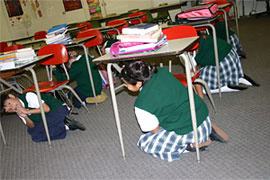 Everybody who went to school in California will remember earthquake drills, when the students dove under their desks and were taught to "Drop, Cover, and Hold on." Last November, these drills were carried a major step further as several hundred thousand people in Southern California participated in what was then the biggest earthquake drill ever in the country. Based on a realistic but hypothetical scenario of a magnitude 7.8 quake rattling the Greater Los Angeles Area, emergency planners, response coordinators, and many citizens practiced what to do during and after a destructive temblor (see blog, November 10, 2008).

This Thursday, on October 15 at 10:15 am, we will go even further than last year. More than six million people - roughly a fifth of California's population - have so far signed up to participate in the Great California Shakeout. The purpose of this first statewide exercise is to practice how to protect yourself during earthquakes, and how to get prepared at work, school, and home. Several government institutions, like the Federal Emergency Management Agency (FEMA), the United States Geological Survey (USGS), and the National Science Foundation (NSF), got together with state and private partners to promote earthquake preparedness. At exactly 10:15 am, students and workers in schools, offices, and companies will act as if a major earthquake were to rattle their buildings. They will take cover, turn off gas lines, go through checklists and - most importantly - evaluate afterward how effective their emergency plans were. If you want to participate and get general information on earthquake preparedness, go to http://www.shakeout.org (hra045).