Displaced By More Than 10 Feet

Earthquakes do not only generate seismic waves, which can be as devastating like those which recently hit Southern Chile and Haiti. They also cause a lasting movement of the Earth's crust. In fact, it is this very movement which - over millenia - defines the rate at which the tectonic plates drift over the Earth's mantle. 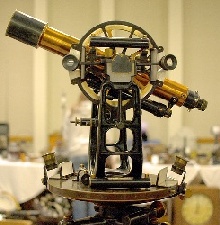 This permanent displacement was first noted a little more than one hundred years ago right on our doorstep. When scientists under the leadership of UC Berkeley's Andrew Lawson fanned out to investigate the effects of the Great San Francisco Earthquake of 1906, one of them, Harry F. Reid from Johns Hopkins University in Baltimore, took his theodelite along. In those days, these instruments (see Figure 1) were used by surveyors to measure the angles between fixed points in the field exactly, be they corner monuments of homesteading parcels or the locations of railroad tracks. Before the 1906 earthquake several such survey lines had been laid across the San Andreas Fault, which was then known among geologists as the "Rift Zone." When Reid revisited these points after the quake and took measurements with his scope, he noted that invariably points on opposite sides of the fault had moved to the right, in some cases by up to 18 feet.

In today's age of satellite navigation, theodelites are an item of the past, having been replaced by highly sensitive, geodetic GPS receivers. These instruments measure movement with much greater precision than your ordinary GPS instrument in a car. They also transmit the data in real-time to research labs, like the Berkeley Seismological Laboratory. In the Bay Area alone, researchers from half a dozen institutions jointly operate a network of 67 such GPS receivers and continuously measure the movement caused by the slip of the Pacific and North American Plates. (See blog October 17, 2008.) 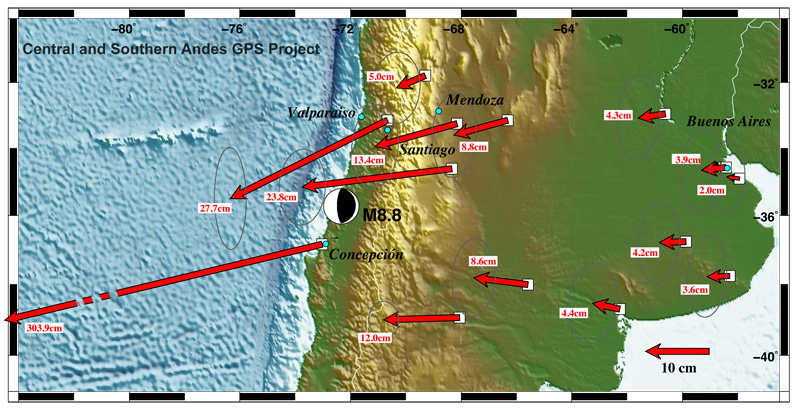 A similar, international cooperation has existed for years in South America under the acronym CAP - Central and Southern Andes GPS Project. This group, led by Mike Bevis from Ohio State University, operates several dozen GPS sites in many countries in Latin American, from Bogota in the North to Punta Arenas in the South. When these researchers compared the GPS data from before and after the Great Chilean Earthquake of February 27th, 2010, they noticed a huge movement. The giant temblor had moved the city of Concepcion in the heart of the epicentral region by more than 10 feet to the west. Chile's capital Santiago moved more than 10 inches, and even in Buenos Aires, more than one thousand miles from the earthquake's focus, the Earth's crust had moved by 1.5 inches towards the Pacific. (hra053)