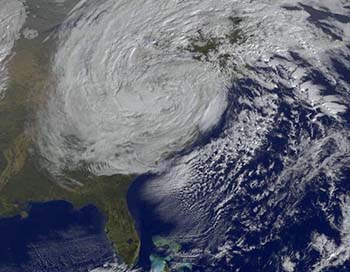 As their name suggests, seismometers are there to measure earthquakes. After all "seismos" is the ancient Greek word for quake and the word "meter" derives from another Greek verb for measuring. In reality, however, the name "seismometer" is quite a misnomer for these marvels of electromechanical engineering. In fact, a modern broadband seismometer is a high precision tool, which measures any kind of tilt and vibrations over a wide frequency band and has a large dynamic range. The connection to earthquakes exists, because any temblor inside the earth produces elastic waves, which make the ground vibrate and tilt. These vibrations can sometimes be violent and lead to enormous damage. However, in most cases they are imperceptible because they let ground swing with amplitudes much smaller than the diameter of a hair. Seismometers pick up even those tiny wiggles.

Besides earthquakes, there are myriads of other causes for ground vibrations, from trucks and trains passing on nearby roads and railroads, to underground nuclear explosions, thunder and lightning, and oceans waves crashing against the shore. Even meteors shooting through the atmosphere (Seismo Blog: Meteors on Seismograms) and huge masses of rocks falling off a cliff (Seismo Blog: The Yosemite Rock Fall of July 10, 1996) can rattle the ground. The wind can also make the ground move, either by shaking large trees whose roots transfer their wiggling to the soil, or through the pressure of gusts on the surface. Such wind effects are usually very local.

Now a group of seismologists have reported on continent-wide seismic wiggles, which were generated by giant Superstorm Sandy. This massive storm rattled the East Coast last October. Its hurricane force winds and the associated heavy rains and storm surges wreaked havoc in New York and New Jersey. But Sandy's reach extended far beyond the Big Apple and the Garden State. Keith Koper and Oner Sufri from the Seismographic Station of the University of Utah discovered the superstorm's seismic signature in seismometer recordings almost everywhere in the Lower 48, even in the Pacific Northwest.

Sandy's seismic signal did not look like an earthquake at all. Instead it was an increase in the amplitude of long period rumbling. These so called microseisms are caused by deep ocean waves which pound the continental shelf many dozens of miles away from the coasts. When Sandy approached the East Coast, this pounding became so strong, that it resembled magnitude 3 seismic waves - however not just one temblor, but a continuous series of these small earthquakes going on non-stop for hours and days. Although the swaying was clearly registered by seismometers all across the country, it was not felt by people. The reason: Sandy's waves did not feel like the sudden jolts caused by the impulsive earthquake waves. Instead it was a gentle swaying in slow motion with periods between 5 and 15 seconds. As Koper and Sufri reported during the recent annual meeting of the Seismological Society of America in Salt Lake City, they are now investigating how seismometer recordings can be used to track other strong storms like hurricanes and typhoons. (hra087)