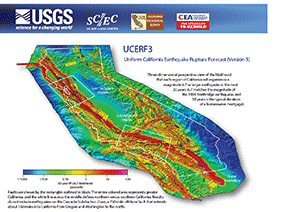 The seismoblogger was amazed how some mass media reacted to the latest announcement of earthquake probabilities in California. "Risk of 8.0 earthquake in California rises" read the headline in the Los Angeles Times. Fox News beamed over the TV channels "Risk of mega-earthquake increases" and LA's KABC even went so far as to say the "USGS predicts massive earthquake in California within 30 years". While none of these statements is completely untrue, they certainly leave the impression as if the big one is imminent and that the USGS can predict giant temblors. What gave rise to these alarmist headlines during the last few days?

On Monday the United States Geological Survey (USGS) released the latest findings of a group of nearly 50 Earth scientists from more than a dozen institutions. The goal of this "Working Group on California Earthquake Probabilities" was to estimate and compute just what its name suggests: What are the chances that potentially damaging earthquakes - those with magnitudes larger than 5 - will strike California within the next 30 years. Such efforts to determine the probabilities are not new. The latest release of the findings is the third in series of similar calculations which began in 1995. Such computations are technically called "probabilistic risk analysis". They enable seismologists to calculate the chances that an earthquake of a certain size will strike a certain segment of a fault during a specified time window (older blog: Earthquake Probabilities in the Bay Area). These calculations are based on our knowledge of the past seismicity along the various active faults in California and also on precise measurements of how fast the plates move in our State. As research progresses and our understanding of fault behavior improves over time, the model calculations of probabilities need to be refined every few years.

That is exactly what happened on Monday, when the very complex and detailed new study of the chances of earthquake occurrence on all known 350 fault segments in California was published. But unfortunately, many in the media focused on just one small aspect of the report: The likelihood that a truly big quake of magnitude 8 or greater will occur in California over the next 30 years increased from 4.7% as calculated in the last report to 7%. Is this jump really significant? Shall we lose sleep over this reevaluation of the chances of a mega-quake? When we look at the other numbers in this report, the answer to both questions is simply "no". The chances that during the coming three decades some part of California will get hit by a magnitude 7 earthquake are a whopping 93 percent - which translates to "almost certain". And one step further: We can be sure (larger than 99 percent) that we will have to live through a magnitude 6.7 in the next 30 years.

The only way not to lose sleep over these numbers is to be prepared - and the preparations for an "almost certain" magnitude 7 quake are exactly the same as those for a "very unlikely" (7%) magnitude 8 event. Hints and examples on how to get ready for and survive the shaking can be found in numerous websites. For example, the Red Cross provides earthquake preparedness information. In the next blog, we will discuss in more detail how the experts computed the most recent probabilities. (hra097)