Not All is Quiet at the Eastern Front

California is full of famous earthquake faults. Almost everybody in the state has heard of the San Andreas Fault. Northern Californians fear the possible rupture of the Hayward Fault, Angelinos are aware of the Newport-Inglewood Fault and in the far northern reaches of California the major fault line lies offshore marking the subduction zone of the Juan de Fuca and Gorda Plates under North America. To be exact, there are a total of 15,700 known faults in our state.

But the strong quakes which rocked the northwestern Mojave Desert around the town of Ridgecrest in the few days following July 4th, 2019, happened on a fault zone almost nobody has ever heard of. They occurred in the "Eastern California Shear Zone", a swath of individual faults, which span from the northern Owens Valley east of the Sierra Nevada through the Mojave Desert all the way to the Palm Springs area in far southern California. In fact, some of the strongest quakes ever felt or recorded in the state took place along this widely underestimated fault system. 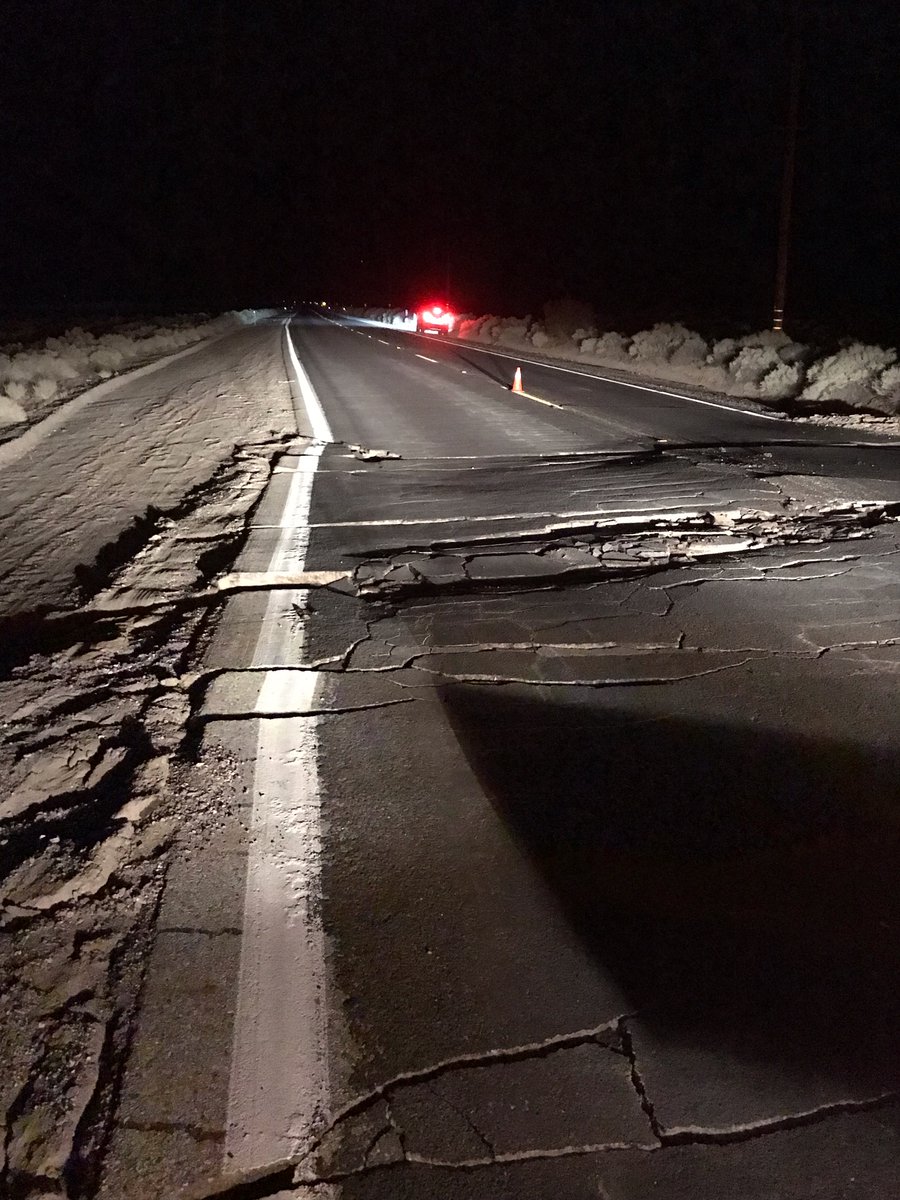 Highway 178 in the epicentral region was damaged by Friday night's 7.1 quake near Ridgecrest. Looking along the white side line, it seems to have been a right lateral strike slip earthquake, because the rear part of the line was moved to the right by the quake rupture. Photo: USGS

The earthquake activity in all of California south of Cape Mendocino is governed by the interaction of the Pacific Plate with the North American Plate. On its epic journey in a north-by-northwesterly direction, the Pacific Plate slides along past North America with a speed of about 2 inches per year. This movement, however, is neither smooth nor steady. Instead, the two plates get tangled, hooked or otherwise hampered in their movement. As a result, tectonic energy in the form of mechanical stress accumulates along the boundaries of the plates. And when the stress gets too high, it overcomes the obstacles to movement, resulting in a sudden jerk of the ground – a motion we commonly refer to as an earthquake.

While the above description of the earthquake process is rather simplified, it is even more simplistic to call the San Andreas Fault the actual boundary line between the two plates. It is very convenient and even intuitive to show the earthquake-generating boundary as a nice continuous line on maps and label it San Andreas, but reality is much more complex. In the San Francisco Bay Area alone, several faults such as the Hayward and the Calaveras parallel the San Andreas and take up some of the tectonic stress. The same is true south of Los Angeles, where the Elsinore and the San Jacinto Faults also take some of the mechanical burden off their more famous sibling, the San Andreas Fault.

Actually, one has to look beyond such individual faults to get a complete and comprehensive picture of the tectonic situation in California. In fact, the entire state is affected by the rubbing of the Pacific Plate against the North American continent. Their motion is so tangled and hampered, that the whole state is torn by the mechanical stress. There is good geodetic evidence that even the mighty Sierra Nevada is dragged in a north-by-northwesterly direction when measured against the easternmost sliver of the state. As happens along the San Andreas and its sibling faults, this movement generates stress between the biggest chunk of the state to the west and the eastern mountain ranges and deserts – leading to an assembly of earthquake faults, which we describe and dub the "Eastern California Shear Zone". According to some calculations, almost a quarter of the mechanical stress due to the relative movement of the plates is taken up by this shear zone.

There are not only the recent magnitude 6.4 and 7.1 quakes near Ridgecrest and their many aftershocks, to teach us not to underestimate the seismic potential in this shear zone. In fact the state's two largest quakes before the recent temblors occurred in this zone. In October 1999 the magnitude 7.1 Hector Mine struck in its southern end beneath the Twentynine Palms Marine Corps Base. Seven years earlier an even stronger quake of magnitude 7.3 hit the Landers area in the southern Mojave Desert. And actually one of the strongest quakes ever felt in the state occurred in the shear zone north of the recent epicenters, when a magnitude 7.8 or 7.9 temblor flattened the town of Lone Pine in 1872.

Without diminishing his empathy for the suffering of the victims in the recent quakes, the blogger also sees a silver lining in the existence of the Eastern Shear Zone. Because it takes up some of the tectonic stress, it reduces the earthquake hazard for the rest of the state. While the actual amount of decrease cannot be quantified at this time, most Californians live to the west of the shear zone and hence in the region where the earthquake risk is higher. Every little bit of reduction in this risk should be welcome. (hra166)