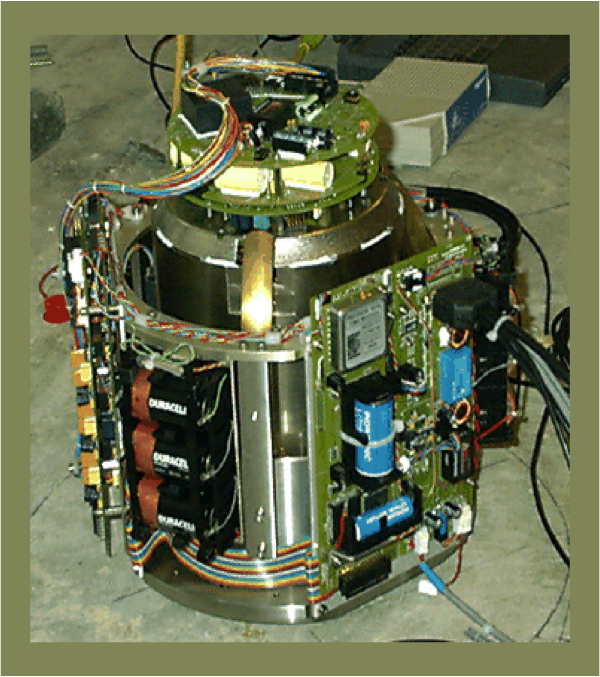 Photo of the Guralp CMG-1TD Serial Number T1045 seismometer in the Byerly Vault (BKS), during testing prior to installation on the seafloor. Shown are the various circuit boards on the sides and the top of the sensor package. Three of the nine batteries used by the leveling system are on the left front and the system clock is on the circuit board on the right. The seismometers are in the mu metal shielded container mounted on leveling gimbals in the center.

The ocean floor package comprises a three component very broadband CMG-1T seismometer system, a differential pressure gauge, (DPG, Cox et al., 1984) and a current meter. The current-meter is a Falmouth Scientific 2D-ACM acoustic current meter. It is held by a small standalone fixture and measures the magnitude and direction of the currents about 1 meter above the seafloor. Data from the DPG are acquired with a sampling rate of 1 sps and are crucial for the development and implementation of a posteriori noise deconvolution procedure to help counteract the large contribution of infragravity wave noise in the period range 20-200 sec (e.g. Dolenc et al., 2007).

The seismic package (Figure 2) contains a low-power (2.2W), three-component CMG-1T very broadband seismometer system, built by Guralp, Inc., with a three-component 24-bit digitizer, a leveling system, and a precision clock. The seismometer package is mounted on a cylindrical titanium pressure vessel 54 cm in height and 41 cm in diameter, custom built by the MBARI team and outfitted for underwater connection.

The autonomous recording system that was originally installed (2002-2009) was a GEOSense LP1 data logger with custom software designed to acquire and log digital data from the Guralp system and digital data from the current meter over RS-232 serial interfaces. The seismic data are sampled at 20 Hz and current-meter data at 1 Hz, and were stored on a 3 GB, 2.5 in. disk drive. All the electronics, including the seismometer and the current meter, are powered by a single 10kWh lithium battery. 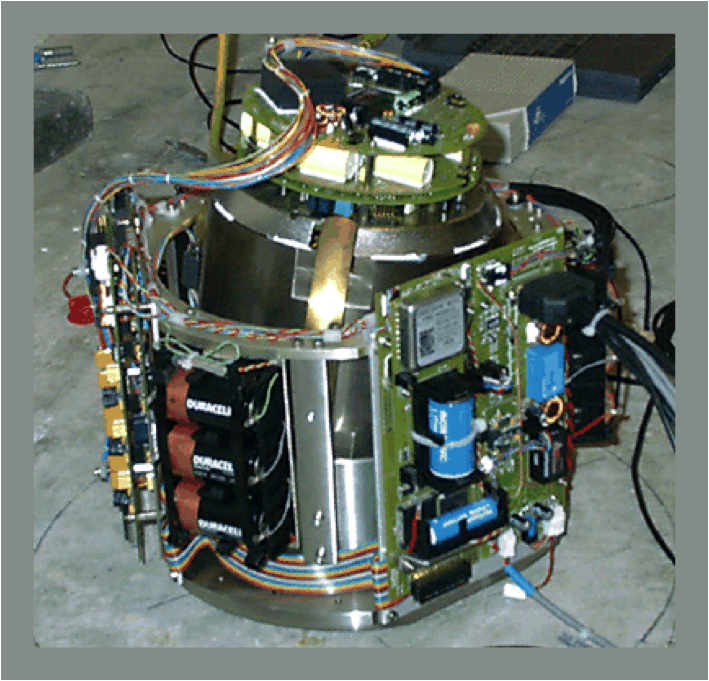 Photo taken after the seismometers were leveled with the base tilted in order to verify the operation of the wide range leveling system. Given the extreme tilt sensitivity of the CMG-1TD's 360 second pendulums, the leveling system is crucial for successful operation on the ocean floor. Note that the central gimbal system containing the seismometers is tilted relative to the outside frame. 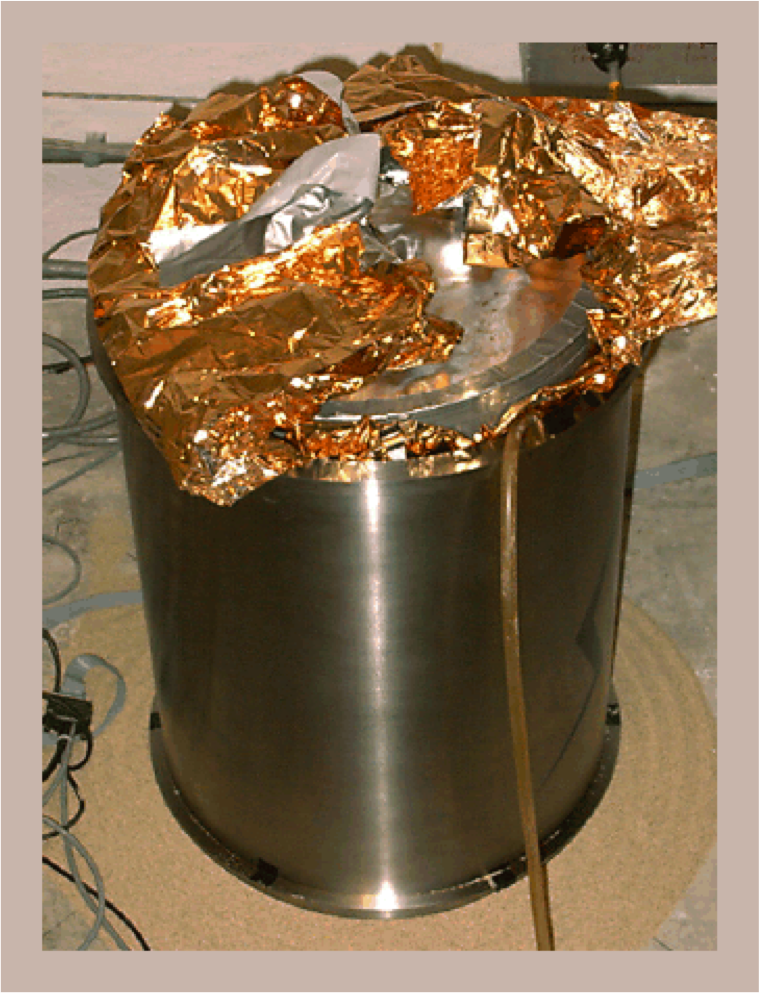 Photo:Titanium pressure vessel containing the MOBB CMG-1 package (with the titanium end cap removed), showing space blanket insulation and space filling urethane foam which was used to inhibit air circulation inside the pressure vessel. The vessel was also purged with dry argon gas which is 37% denser than air and has thermal conduction properties that tend to inhibit convection.

Because of the extreme sensitivity of the seismometer, air movement within the pressure vessel must be minimized. In order to achieve this, after extensive testing at BSL (reference; see 2001-2002 and 2002-2003 BSL Annual Reports), the top of the pressure vessel was thermally isolated with two inches of insulating foam and reflective Mylar (Figure 3).

The sides were then insulated with multiple layers of reflective Mylar space blanket, and the vessel was filled with argon gas. These procedures were later applied to the preparation of 3 similar packages destined for installation on the Juan de Fuca plate in the framework of University of Washington's Keck project (Wilcock et al., 2007).