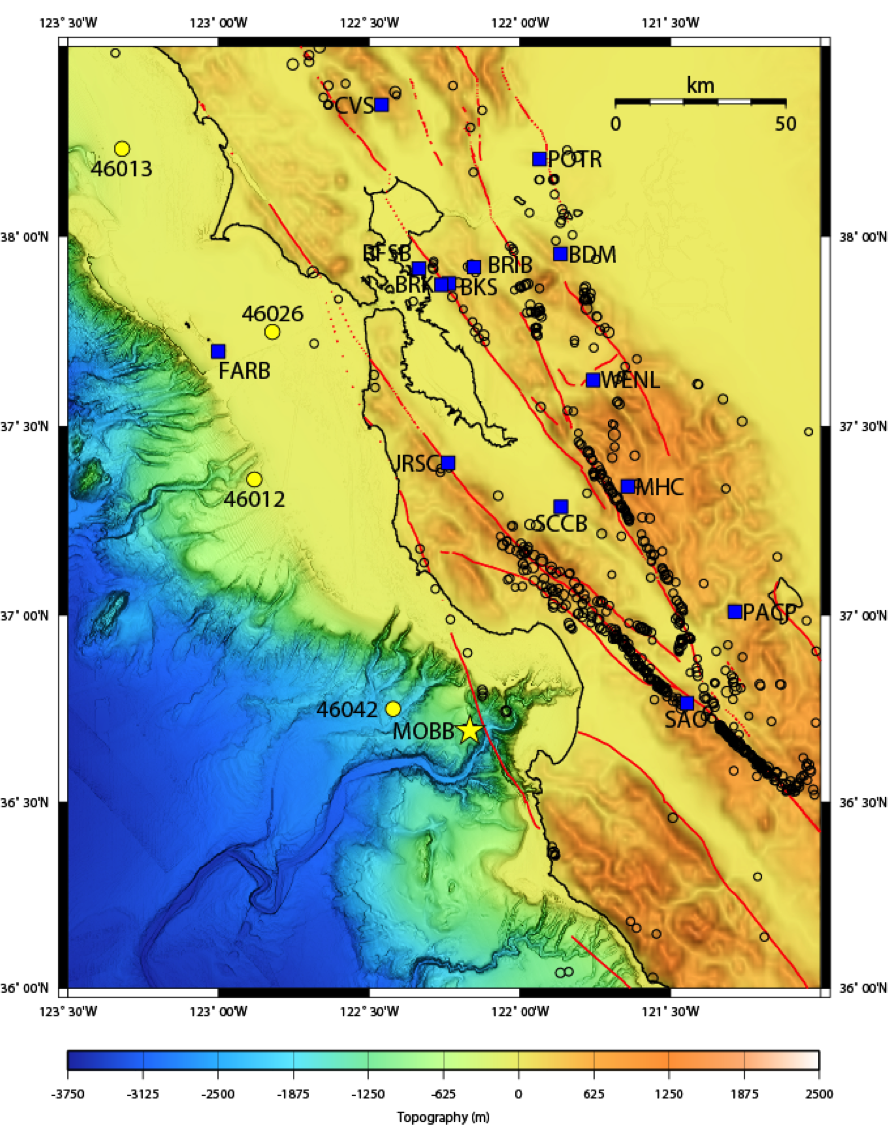 The MOBB station has been down since July 2017 due to a failure of the extension cable that links it to the main MARS cable and provides access to the data as well as power to the instruments. As of March 14, 2018, we are still looking for ways to determine the extent of the failure (i.e. whether the whole cable needs to be replaced)

The Monterey Ocean Bottom Broadband observatory (MOBB) is a collaborative project between the Monterey Bay Aquarium Research Institute (MBARI) and the BSL. Supported by funds from the Packard Foundation to MBARI, NSF/OCE funds and UC Berkeley funds to BSL, its goal has been to install and operate a long-term seafloor broadband station as a first step towards extending the on-shore broadband seismic network in Northern California to the seaside of the North-America/Pacific plate boundary, providing better azimuthal coverage for regional earthquake and structure studies (Figure 1). It also serves the important goal of evaluating background noise in near-shore buried ocean floor seismic systems, such as may be installed as part of temporary deployments of "leap-frogging" arrays (e.g. Ocean Mantle Dynamics Workshop, September 2002).

This project follows the 1997 MOISE experiment, in which a three component broadband system was deployed for a period of 3 months, 40 km offshore in Monterey Bay, with the help of MBARI's "Point Lobos" ship and ROV "Ventana". MOISE was a cooperative program sponsored by MBARI, UC Berkeley, and the INSU, Paris, France (e.g. Stakes et al., 1998; Romanowicz et al., 1999; Stutzmann et al., 2001). During the MOISE experiment, valuable experience was gained on the technological aspects of such deployments, which contributed to the success of the present MOBB installation.

The MOISE and MOBB deployments are multi-purpose experiments to develop, install, and operate a seafloor observatory. The MOISE experiment was conducted from 6/10/1997 - 9/10/1997 and all equipment was successfully recovered. The MOBB deployment began on 4/12/2002 and is now a permanent installation, sending data in real time through the MARS observatory cable. Supported by funds from the Packard Foundation to MBARI, NSF/OCE funds and UC Berkeley Funds to BSL, the installation and operation of the long-term seafloor broadband station MOBB is a first step toward extending the broadband seismic network in Northern California to the seaward side of the North America/Pacific Plate boundary.

The MOBB project has been supported by a combination of BSL and MBARI funds, as well as funds from the NSF/OCE program.

Network Codes
BK (also includes the BDSN, NHFN, MPBO)
Typical Station Equipment
Guralp Broadband seismometer
Magnetometer (MOISE only)
Current Meter
Pressure Meter
Typical Recorded Channels
As part of this collaboration, the site has two digital dataloggers. The table below lists which channels are recorded and the SEED network and location codes used. Instrumentation and channel information is now available on the MOBB station page
Data access
The preliminary data for the autonomous MOBB deployment from 04/10/2002 through 10/27/2007 are available in daily MiniSEED format and can be retrieved by HTTP:

Data from the current deployment (03/03/2009-present) is archived at the NCEDC as part of the BK network.
Reports
Collaborations
MOISE is an international cooperative program among MOBB is a collaboration among