What a Difference 150 Years Make

During the next few months, people in Northern California will hear a lot about the Hayward Fault. This geologic fault line, which extends along the foot of the East Bay Hills from Point Pinole in the north to the Warm Springs District of Fremont in the south, is considered one of the most dangerous earthquake faults in our area. One reason is that among all the faults in Northern California, it has the highest probability of generating a strong quake in the next 30 years. It also runs through some of the most densely populated areas in our region and crosses dozens of important life lines, from railways, BART, drinking water tunnels, and pipelines to major freeways. Hence the potential for widespread destruction to be caused by a strong Hayward Fault quake is very high.

One of the reasons for that heavy focus on the Hayward Fault is the upcoming 150th anniversary of the last major quake along this fault. On October 21st, 1868 at 7:53 am a 900 square mile region, from Gilroy and Santa Cruz in the south to Santa Rosa in the north, began to shake violently. With an epicenter near the city of Hayward, the fault which bears the town's name had cracked the Earth's surface along a line almost 20 miles long, shifting the two flanks of the fault by more than 3 feet at the surface. The earthquake with an estimated magnitude of 7 caused nearly every building in Hayward to be damaged or destroyed and the adobe walls of Mission San Jose to crumble. In San Francisco the destruction was so large that the temblor became known as the "Great San Francisco Earthquake." This honorary title was removed four decades later, when a bigger earthquake came along - the disaster on April 18, 1906, when most of the city went up in flames. 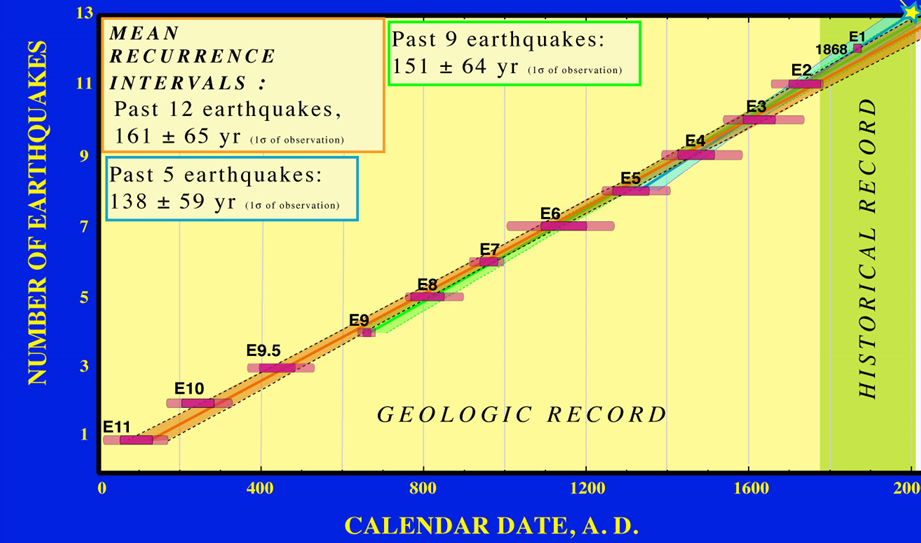 Figure 1: Going back almost 2000 years, about 12 major earthquakes have occurred on the Hayward Fault. According to a study by Jim Lienkaemper (USGS Menlo Park) the average repeat time for the last nine quakes was 151 years. (adapted from BSSA, 2010)

The fact that 150 years have passed since this large quake occurred has led to a wide array of speculation about the timing of the next big quake. The reason has to do with trenches dug by researchers at various locations across the Hayward Fault. From slight shifts and displacements in the soil layers along the trenches' walls they found evidence that during the past two millennia, almost a dozen large temblors have shaken the Hayward Fault. Computing the repeat interval for the most recent nine of these quakes, they found that on the average a large quake has occurred every 151 years. Comparing that to the 150 years which have passed since the last big one, it is no wonder that many Bay Area residents fear that the Hayward Fault is now due for a big one very soon.

That the two numbers are so similar is, of course, purely coincidental. Firstly, earthquakes don't happen as regularly as clockwork. And dating the quakes in the past is not an exact science. As indicated by the red bars in the figure, the uncertainty in determining the timing of a past event can be as large as 180 years. Hence the computed repeat time of 151 years is an average with a statistical error of +/- 64 years.

Nevertheless, there is no doubt that a large quake will happen along the Hayward Fault sometime in the future. According to the latest estimate, there is a probability of 33 percent that a quake with a magnitude of 6.7 or larger will occur in the East Bay in the next 30 years. This is the highest probability among all the Bay Area Faults. Although it is not more likely that this quake will occur on the 150th anniversary of the last big one than on any other day in the next decades, there is no reason to let down your guard in preparing for such a potentially destructive temblor.

That's why seismologists, earthquake engineers, emergency planners, and many other experts have spent considerable time during the past few years estimating the effects of a major shock along the Hayward Fault on the Bay Area. Their effort resulted in what is called the HayWired Scenario. In this year's annual Lawson Lecture organized by the Berkeley Seismological Laboratory for April 18, 2018, these experts will present their results to the public. The event will happen at 4:30 pm in the University Club in Berkeley's Memorial Stadium. The Haywired results are sobering and mind boggling at the same time. (hra151)