G-larmS is an earthquake early warning algorithm designed for big quakes (magnitude > 7). It builds on the alert provided by the seismic E-larmS algorithm, by adding geodetic data, and tracks the geographic extent of the fault rupture.The G-larmS system is currently running in test mode on real-time data from GNSS stations across the U.S. West Coast, as one of the geodetic algorithms being developed for ShakeAlert.

G-larmS research started in 2010 with the realization that real-time GPS data was accurate enough to be used for real-time earthquake information (DOI: 10.1029/2011GL047947). Following the M9 Tohoku-Oki earthquake in Japan, the need for better real-time information about really big earthquakes became clear (https://doi.org/10.1002/jgrb.50242).

As residents of the West Coast, it is our good fortune that large earthquakes rarely occur in our region, however, this is not ideal for testing algorithms that need data from large earthquakes. As a result, we created "Fake Quakes" for testing G-larmS and the other geodetic algorithms underdevelopment. The Fake Quakes are a suite of simulated waveforms from large and great earthquakes such as those that might affect the West Coast.

G-larmS Alerting During the 2019 Ridgecrest Earthquake

The need for incorporation of real-time Global Navigation Satellite Systems (GNSS) data in earthquake early warning was demonstrated earlier this year by the M 7.1 Ridgecrest earthquake. ShakeAlert®, which does not yet include a GNSS algorithm in production, reached its final magnitude estimate of 6.3 around 20 seconds after the origin time.

The geodetic earthquake early warning algorithm G-larmS, running on a replay of real-time GNSS data from the Ridgecrest event, reached a magnitude estimate of 6.7 at 21 seconds past the origin time, which increased to 7.0 at 35 seconds and then held steady. These magnitude estimates are closer to the true magnitude of 7.1. Los Angeles did not experience shaking from the Ridgecrest earthquake until approximately 48 seconds past the origin time, 24 seconds after G-larmS had estimated a magnitude of 6.7. This shows that including real-time GNSS data in a future version of the operational ShakeAlert system will lead to more accurate estimates of magnitude for large earthquakes and thus more accurate predictions of ground shaking.

The movie below shows a G-larmS model of slip on the Ridgecrest earthquake fault in pink colors, in both a map view and a straight on view of the fault at the bottom. Dots show GNSS site locations, and arrows show data misfits. On the right side, the movie shows the real-time GNSS positions at 4 sites as lines, with x’s showing the estimates of permanent ground displacement. The top right box shows the estimate of earthquake magnitude as it evolved over time.

G-larmS Alerting During the 2019 Ridgecrest Earthquake 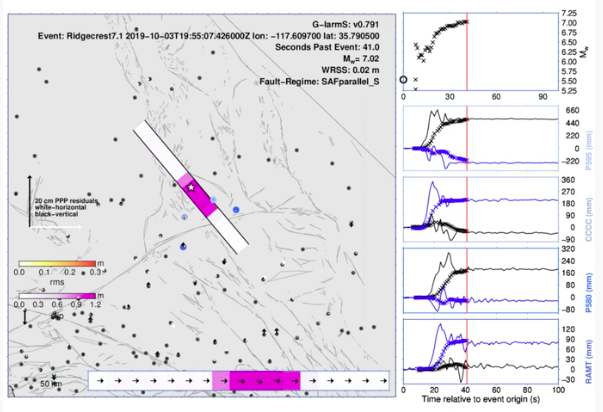 GlarmS Alerting During the 2019 Ridgecrest Earthquake 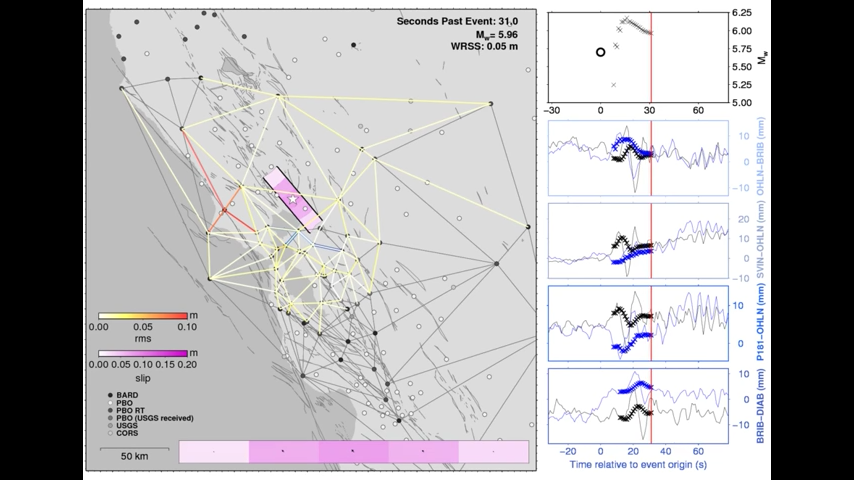 The above video illustrates the G-larmS assessment of the August 24, 2014, magnitude 6 Napa earthquake. The map shows the baselines used to detect ground deformation associated with the earthquake. The purple bar illustrates the amount of slip estimated on the Napa fault. Top right shows the magnitude estimation, and lower right shows the time history of four baselines. This is a rerun of the data with no latencies. The realtime system provided the first magnitude estimate 24 sec after the origin time. With improvements made to the code, we would now expect this information 12 sec after the origin time. G-larmS is designed to add additional information to alerts for big earthquakes, i.e., magnitude greater than 7. The magnitude 6.0 Napa quake is below the design range for GlarmS, but its performance in the replay suggest that M 6.0 could be considered the lower limit of when geodetic data can provide information about an earthquake.